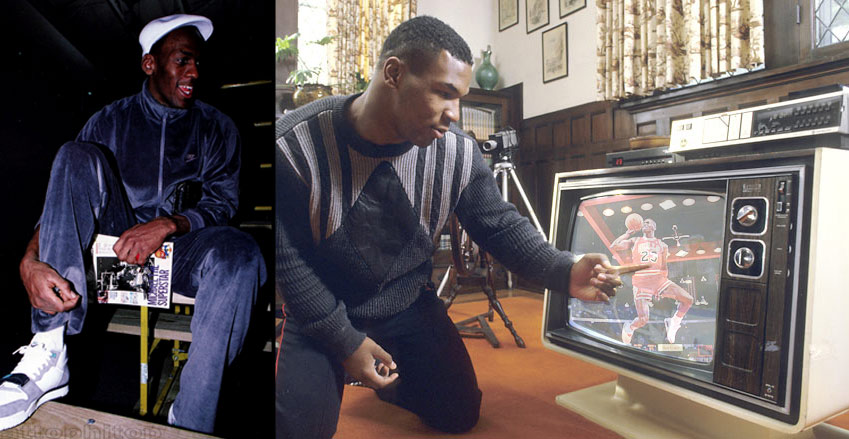 Believe it or not, there once was a time when Michael Jordan wasn’t the unanimous favorite Mike in sports. Long before he became a scene stealer in Hangover movies and even before he was known for having an ear fetish, Iron Mike Tyson was in GOAT arguments about boxing (never was close in my book) and damn-near impossible to beat in Nintendo’s Mike Tyson Punch-out. He was on top of the world and at the head of the class when he was rolling in millions and rolling with Head of the Class star Robin Givens on his side. Never mind that Robin had ugly feet (Marcus will tell you that), she was one of the most desired women of the 80s and supposedly one of the guys who desired her was none other than Michael Jordan.

In a new book called Taming the Beast: The Untold Story of Mike Tyson by Rory Holloway, there’s an amusing story about the night the two Mike’s, along with Mike Ditka, Richard Dent, and Don King were out on the town and Iron Mike confronted Air Mike about his relationship with Givins — who was now divorced from Tyson.

“Mike Tyson’s sitting there with his drink of choice, a Long Island Tea, and when he drinks his real feelings come out …,” Holloway writes.

“I’m telling the server to water his drinks down ‘cause I see where this is going. Mike stares across the table at Michael Jordan. He says, ‘Hey man, you think I’m stupid? I know you f—-d with my b—h.’

“Jordan looks like he just seen a ghost. ‘I know you messed with her,’ Mike says. ‘You can tell me.’

“Jordan, it’s obvious he just wants to get up and run. He wants no part of this. Mike turns to Ditka. ‘Man, you think somebody scared of you, all that racist s–t you been talking?’ He says to Dent, ‘Y’all scared of this damn white man, Richard? He ain’t nobody. You gonna let him talk that way?’

“It was a circus, for real, that night. Don King trying to change the subject. Me and John trying to hold Mike down. Mike telling everyone he’s going to bust Jordan’s ass. Jordan’s dressed sharp as always and he can’t get out of there fast enough.”

You would have thought Don King would have seen this as an opportunity for himself, but thankfully he didn’t, which allowed MJ to live and win six NBA championships and become the great owner of the Charlotte Hornets….ok maybe Don should have let Tyson kick Jordan’s A$$.

Then again, maybe we are all underrating Jordan’s skills with his fists. He could kick some serious a$$ in “Chaos in Windy City,” punched Will Purdue according to Horace Grant and even punched Steve Kerr in the face!

Who am I kidding, we all know the GOAT was a puppy when it came to fights.

But he was probably a better fighter than Tyson was a hooper.

Anyways, I’m assuming they were both cool with each other by the time the following video happened.  If not, I’m sure MJ was a little nervous every time he ran down the court and saw Tyson smiling at him.