Fantasy owners drooled over Russell Westbrook’s latest stat buster – 46 points (16-33 fg), 11 rebounds, 7 assists – but many basketball fans weren’t impressed with his decision making and final “hero ball” shots in the final 10 seconds of the Thunders’ loss to the Hawks on Monday. Down by two with 10 seconds left in regulation, Westbrook, feeling some contact, forced a twisting shot between two defenders from the free throw line. No call. He got the offensive rebound, forced up a shot between four defenders and had it swatted out of bounds.

Still down by two with 2.9 seconds left, Westbrook, who was 3 of his last 9 from downtown, catches the inbound pass and  pulls up for a three and misses – possibly because of another missed foul call. Steven Adams picked up the offensive board and had a chance to save the game but instead of flipping the ball up in the final second, he held onto the ball and dunked it…right after the buzzer.

A pissed off Westbrook yelled at a ref to “blow the fucking whistle” and smacked powder off a table. His coach also felt Westbrook was cheated in the final moments.

Fouled or not, Westbrook is now 0 of 5 this season on go-ahead shots in the final 5 seconds of regulation and OT, which doesn’t sound so clutch. But, his tough game-tying shot with 33 seconds left in regulation and this graphic from last week tells another story. 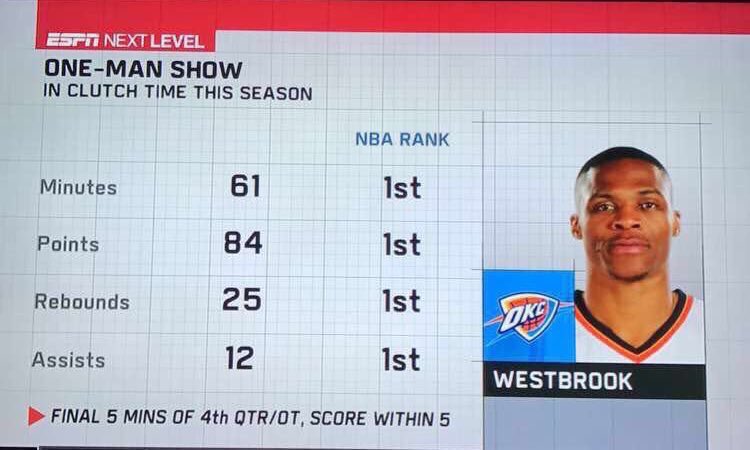