Is it the shoes? Money, It’s gotta to be the shoes!

Nick Young celebrated his new shoe deal with Adidas on Saturday by wearing the Kanye West designed Yeezy 750 Boosts – retails for $350 but usually sells for atleast $750 – against the Rockets.

“It felt good,” said Young about the expensive kicks. “It actually felt good on my feet. I was worried about the same thing, but once I put them on and got out there on the court, it was just time to play.”

Young felt so good, he scored 13 points on 5 of 10 shooting and had 1 historic assist: his assist in the 2nd quarter to Kobe Bryant was his first assist to Bryant in 451 minutes (two and a half seasons) of playing time.

“It was the Yeezys tonight that got the assist for him,” Young joked.

As amusing as that moment and quote was for Lakers fan, not so funny was watching the Lakers lose to the Rockets by 29 points. The loss was the teams’ 6th in a row and 13th out of their last 14 games.

Well, at least Swaggy has found a way to stay positive.

“You’ve got to do something to try to get your spirits up while you losing and all that, and that’s where I find confidence and my joy and trying to keep doing it, keep doing stuff like this.”

T-MAC & THE FRANCHISE IN THE HOUSE

Tracy McGrady – sitting next to Steve Francis – also wore the same shoes on the sideline but didn’t get as much social love. 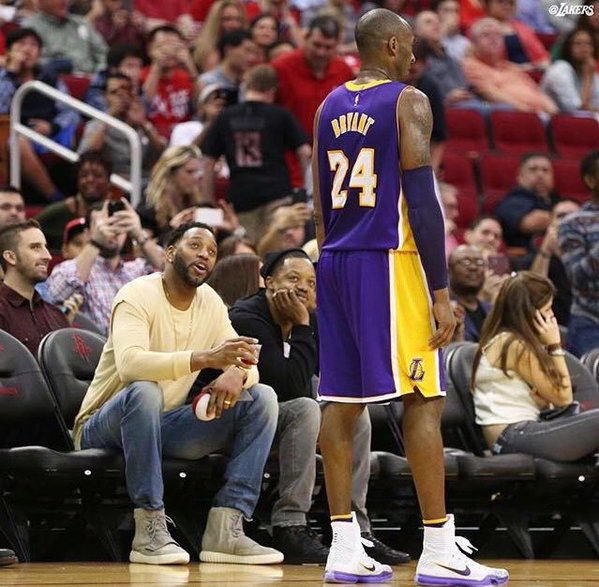