In Kobe Bryant’s new BODYARMOR ad, titled ‘Obsession,’ you can see two-time WNBA All-Star and Goddess Skylar Diggins training, putting up shots and getting ready for what I believe will be a big comeback year for the 26-year-old guard. She tore her ACL back in 2015 and tried to return sooner than she should have during a very disappointing season for her and her Dallas Sky team.

Last week, I got to have a quick Q&A with Diggins about health, personal obsessions, and the BODYARMOR ads’ director, Kobe, who also happened to be her favorite basketball player growing up.

What does the “obsession is natural” tagline mean to you?
We are our own worst critics and the obsession, the passion that drives us to compete and to continue sharpening our tools is natural to us.”

Like Kobe says in the ad, it’s that passion that “separates the good from the greats and the greats from the legends.”  It’s also what Kobe wrote on a towel during his legendary 60-point grand finale last year.

I read that Kobe letter on the Players’ Tribune about how obsessed he was with Iverson and how he even studied the way sharks hunted seals to prepare for his battles with AI. Is their an Allen Iverson in your basketball career?
Not yet. If you ask me in 10 years I might have one. But, I play against the best of the best every night in the WNBA. There are 12 teams with 140 talented players and you have to prepare for every one of them.

Do you remember when basketball went from something that was fun to something you were obsessed with?
I loved all sports as a kid: I played volleyball, softball, basketball. Then in 8th grade, playing basketball and being coached by my Dad, I was offered a scholarship. I didn’t full understand what it meant at the time because I was just 14 and learning. But when I knew I could go to college playing basketball it became an obsession.

Was your obsession ever a problem with family and friends?
Not my family. Maybe friends because people have different passions but I just stayed focus on wanting to excel.

I’m sure Kobe and his musecage puppet would agree with this, to be successful, you have to surround yourself with inspirations. What are some of those in your life?
My family. I have two sets of parents, grandparents, a blended family and fiance that all support and inspire me.

My 12-year old daughter is making the transition from gymnastics to basketball. Her coach is trying to get her to loosen up and not be so stiff and tight like she was in gymnastics. Any tips?
You have to emphasize fun. People are so tight and scared to mess up. Parents are trying to force things and they just need to relax. I think people forget to teach fun.

The old way of thinking was to let active kids be kids and eat what they want because they will burn it off. What your thoughts on kids and nutrition.
I don’t think active kids need to be on a strict diet. For me, I didn’t really start thinking about it until my teenage years. Then in college, it was about moderation with the occasional cheat meal.

We all know a lot of sports drinks are as bad for you as sodas. What really separates BODYARMOR from other sports drinks?
The taste for one. It really tastes great and it’s all-natural with Coconut water. It also only has 20 calories.

FYI, the last 32 oz bottle of Gatorade I had had four times the amount of calories and the last Vitamin Water had fives times with 32 grams of sugar. I’m not trying to sound like a commercial or kiss up to Diggins (maybe I am and was) but if you are concerned about your weight and drinking lots of Vitamin Water or trying to be like Mike, you might end up looking like current Mike on the sidelines of Hornets games (minus the millions of dollars and torn jeans).

So now let’s look at some of the hard work Diggins put in off the court and in the gym….and yes, she is pressing 40-pound dumbbells at the end of this video. 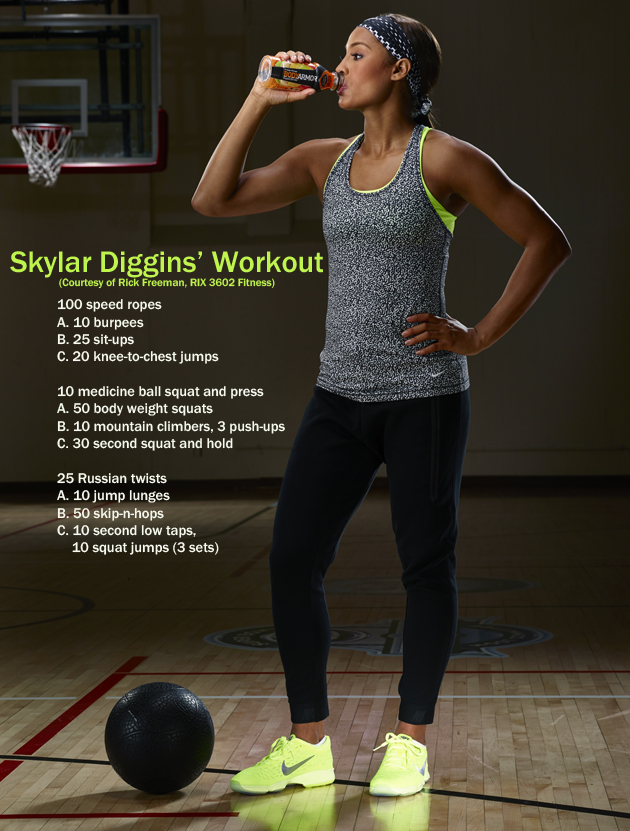 Back in her college days…