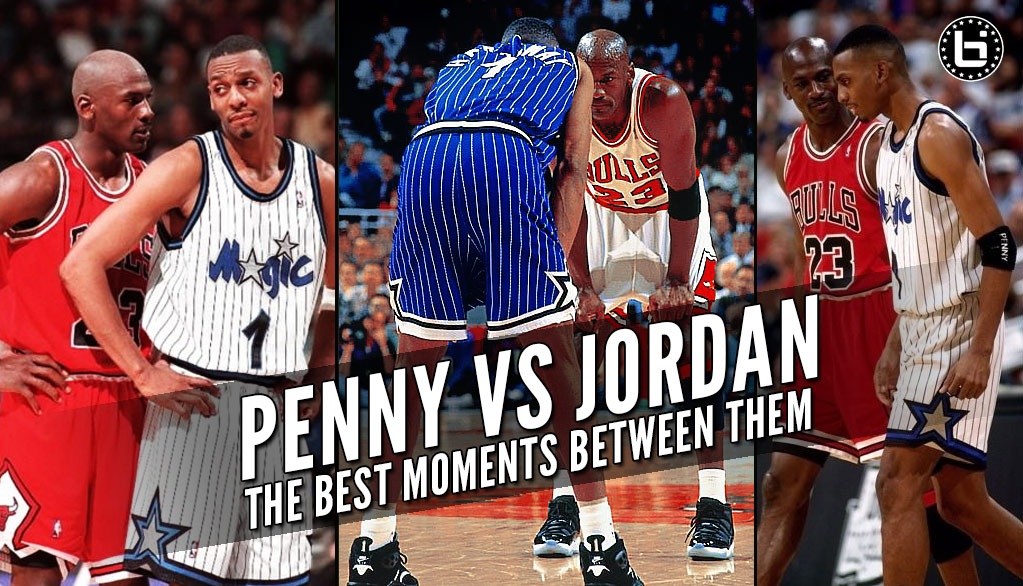 This might be hard for most basketball fans under the age of 25, maybe even 30, to believe, but for a couple of years during the middle of the ’90s, Anfernee “Penny” Hardaway was just as popular as Michael Jordan. And if you lived around central Florida during this time, like myself, you weren’t trying to be “Like Mike,” you were trying to be like the man I now call “your favorite player’s favorite player.”

Granted, much of Penny’s rise happened while the GOAT was trying to get grand slams instead of slam dunks and companies like Nike and Upper Deck were doing their best to put Penny’s face everywhere they originally had Jordan’s mug (including on mugs), but, Penny wasn’t hype created in a marketing meeting; Penny was more like a what-if player made in hoop heaven: What if Magic Johnson had hops? What if Isiah Thomas was tall?

Earlier this year, Gatorade had Penny Hardaway present high-school phenom Jayson Tatum with the Gatorade National Boys Basketball Player of the Year award and then gave me the opportunity to spend a few minutes with the man who gave me years of joy and reminisce about the 90s and his most memorable moments with and/or against Michael Jordan, who once wore Penny’s Air Flight One signature sneakers during a Playoff game.

Penny’s first encounter with Jordan came during the summer of 1992 when the Dream Team scrimmaged against a group of college players including Chris Webber, Grant Hill, Bobby Hurley, and Penny. In their first scrimmage, the college stars pulled off a shocking 62-54 victory over the unbeatable Dream Team. Barkley got dunked on by both Webber and Rodney Rogers and a frustrated Jordan said afterward, “we got killed.”

On the following day, the Dream Team got payback and schooled the college kids by destroying them. How bad? According to Charles Barkley, it was by 100.

I asked Penny if he got to match-up with Jordan in the scrimmages and if he ever schooled him.

“Oh yeah, we matched-up but he schooled me.” Replied Penny.

On September 9th of 1994, a retired Michael Jordan played in a charity game called the Scottie Pippen All-Star classic. It was the last basketball game played in the old Chicago stadium. The image people remember from the game is one of Jordan kissing the ground and the stat people remember is 52, which is how many points he had (on 46 shots).  For many in attendance, the player and stat that left them scratching their heads was Penny Hardaway and his unofficial 42 points and 80 assists! Did he really have 80?

“I probably did,” laughed Penny. “We ran the other team out of the building. They put all of the guards (Jordan, Penny, Jason Kidd, John Starks) on the same team and we were going against the Bulls (BJ Armstrong, Toni Kukoc, Ron Harper).

THE PASS. THE POSTER 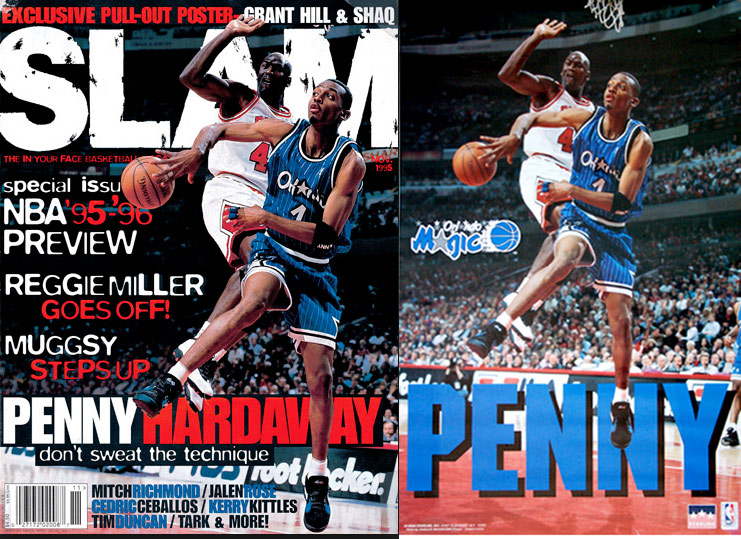 This moment is also my favorite door poster ever and maybe my favorite Slam magazine cover too.  Penny already knew what play I was talking about by just mentioning the poster.  I asked if the assist was instinct or planned.

“I remember that play and I’m not sure how I made the pass,” said Penny  “Michael was coming from behind and I saw Horace coming and it just happened.”

It also happened to really piss off the recently un-retired-45-number-wearing Jordan, who committed the turnover, which led to this memorable playoff moment and photo.

More memorable than “The Pass” was “The Steal” in game 1 of the ECF.  With 10 seconds left, Jordan had the ball poked away by his friend Nick Anderson, Penny gathered up the loose ball and passed it to Horace Grant for the game-winning dunk. The steal and image of former teammate Horace Grant celebrating after the Magic eliminated the Bulls haunted Jordan and became his biggest motivation to come back with a vengeance.

“It felt great to beat the unbeata-Bulls.” Said Penny.

Not so great was having a similar feeling when the Magic lost a heart-breaking game 1 in the NBA Finals and ended up getting swept by the Houston Rockets.  Like MJ and the Bulls, Penny and the Magic seemed unbeatable the following season.

PENNY & ONE OF THE MOST UNDERRATED TEAMS OF ALL-TIME

Everybody remembers the Bulls going 71-10 the following season but not many remember how dominant the Orlando Magic were  – even without Shaq.

During a preseason game against the Miami Heat, center Matt Gieger broke Shaq’s big thumb, forcing him to sit on the Magic bench for 22 games. Penny stepped up and helped the Magic start the season with 33 straight home wins.

“I think that was my coming out party. That’s when I averaged the most points and showed I was one of the top players in the league.” Said Penny with confidence in his voice I often thought he lacked during his early playing days.

I brought up the November 14th game against the Bulls when Penny outscored the league’s best scorer 36 to 23 and gave the Bulls one of their 10 season losses.

“I was giving him fits.” Laughed Penny.

I then told him how me and my friend jumped off a couch when he gave Jordan a taste of his own medicine with a turnaround fadeaway shot in the 4th.

“Oh yeah, I remember that too.”

We then discuss how he thinks this underrated Magic team would have done against the current record-breaking Warriors team.

“We would have adopted the strategy of Milwaukee on Steph.” Answered Penny, referencing to the Bucks ending the Warriors’ 24 win streak to start the season. “We had a real big team with me, Nick and 3D.”

Penny and Nick were often the two best rebounding guards in the league and one of the many reasons why I believe this Magic team is a better team than the current Warriors team, which has no business being compared to the 72-10 Bulls team that swept Penny and the Magic at the end of this breakout season.

The last moment I brought up came during All-Star weekend – where Penny can enjoy how great it feels to get easy assists by passing to Jordan and not have to worry about keeping him under 50. The 96 Eastern All-Stars are being introduced, Penny’s name is announced and every eye is on him as he grabs his falling pants, which were pulled down by a pranking Jordan.

“Maaaaan, MJ was always playing around.” Said Penny in a tone that sounds like a person talking about how he wish he could go back in time and punch a bully known for taking lunch money.

I smiled and remembered not spending my lunch money so I could buy a pack of Upper Deck, Hoops, Skybox or Fleer basketball cards, hoping to pull a card of one of the most talented basketball players to ever bless the NBA. A player not going to the hall of fame and not on any basketball Mount Everest, but he’s “your favorite players favorite player” and if it wasn’t for injuries, he would have been just as good or better than those players and maybe even the GOAT himself.