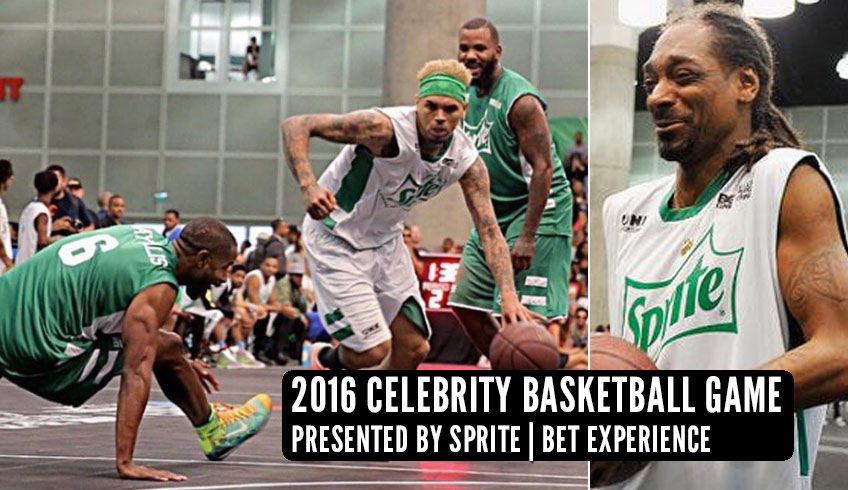 One of our favorite annual basketball events to cover is the BET Experience Celebrity Basketball Game Presented By Sprite. Over the past few years, we have seen everything from one of the sickest dunk exhibitions ever (2013) to Justin Bieber showing off his hops (2014) to Chris Brown doing his best Chris Paul impersonation (2015) by breaking ankles and throwing lobs.

Unfortunately, the “Next To You” duo wont be participating in this month’s game, but celebrity hoop regulars like Snoop, The Game and Nick Cannon will be. International dunk phenoms Guy Dupuy and Kenny Dobbs – both most recently seen competing in The Dunk King reality show/dunk contest- will also be playing, along with former NBA player Doug “I punched Rick Fox” Christie and rappers/singers like Ty Dolla $ign, Omarion, Desiigner, Lacrae (Steph Curry’s favorite artist) and a few actors from the hilarious tv show “Black-ish.”

Check out the official press release for the June 25th game and some of the best highlights from the past few years.

As previously announced, BET Networks will make its return to Los Angeles for the 4-day music, comedy and entertainment festival, the BET Experience at L.A. LIVE presented by Coca-Cola®, June 23 – 26, 2016. Teaming up with AEG, one of the leading entertainment companies in the world and developer/operator of L.A. LIVE and STAPLES Center, the BET Experience at L.A. LIVE presented by Coca-Cola® will feature some of today’s hottest artists including Lil Wayne, 2 Chainz, Fetty Wap, A$AP Ferg, Usher, Bryson Tiller, Katt Williams, Mike Epps, Metro Boomin, The Roots & Friends, Ty Dolla $ign, Kehlani and more. The four day event will showcase the best in music, comedy concerts, entertaining and interactive activations at the FREE fan festival, “106 & PARK” tapings, seminars and celebrity appearances.

VIP Packages for the BET Experience weekend are now on-sale.  In addition to VIP amenities throughout the weekend and incredible seats for the STAPLES Center shows, three levels of BETX VIP Packages offer guests the only opportunity to purchase tickets to the highly anticipated BET Awards, broadcast live from Microsoft Theater.  The 1,000+ VIP Packages sold out in 2015, so guests are encouraged to purchase now before the allotment is depleted.  Full package amenities and pricing for the Diamond, Platinum and Gold VIP Packages can be found by visiting BETExperience.com or by calling (877) 234-8425.

General tickets for the BET Experience at L.A. LIVE presented by Coca-Cola® are now on sale. Single day STAPLES Center show tickets are priced as low as $49.50, while 3-day STAPLES Center concert ticket packages start at $148.50. Tickets will be available at http://www.axs.com/betexperience.

Follow BET Experience on Twitter @betexperience for the latest and greatest and join the conversation by using #BETX.  Feel free to also check us out online at http://www.betexperience.com.