Down by three with 2.4 seconds left on the clock, it appeared that Terrence Ross drained a deep three to force OT with time still left on the clock. After the refs reviewed the play, they overturned it, saying DeMarcus Cousins tipped the ball on the inbound, causing the game clock to start late, meaning Ross did not actually get the shot off in time.

I’ve got to hear another explanation better than that because we reviewed it about 10 times in there,” said Raptors coach Dwane Casey, who threw and broke a clipboard when hearing the three was overturned. “Even if the clock started once DeMarcus Cousins deflected it, T-Ross caught it, shot it, and still had shot it at .5 with plenty of time.”

Callahan: “First of all, the trigger was a clock malfunction. We had the ball deflected, and the clock didn’t start.”

Question 2: “So the replay trigger was the clock didn’t start when the ball was tipped by DeMarcus Cousins?”

Question 3: How much time elapsed between when DeMarcus touched and when the clock started?

Question 4: How was it determined that it was more than 2.4 seconds?

Question 5: “So from when DeMarcus touched the ball until it was let go was 2.5 seconds?”

Question 7: How was the 2.5 seconds determined?

Callahan: “A digital timer on the screen in the replay center, from different angles.”

Obviously the players on the Raptors thought the call and explanation was BS but knew the NBA would fine them if they admitted it.

“I’m going to save my money and say no comment,” Kyle Lowry said.

Worth mentioning is the Kings did force Lowry to commit seven turnovers and held DeMar DeRozan to a season-low 12 points on 3 of 15 shooting. This victory is also the 2nd time the Kings have beat the Raptors this season. The Raptors will probably appeal but considering the last time they won an appeal was in 2008, they are just going to have to deal with the fact that they were swept this season by the 5-9 Kings. 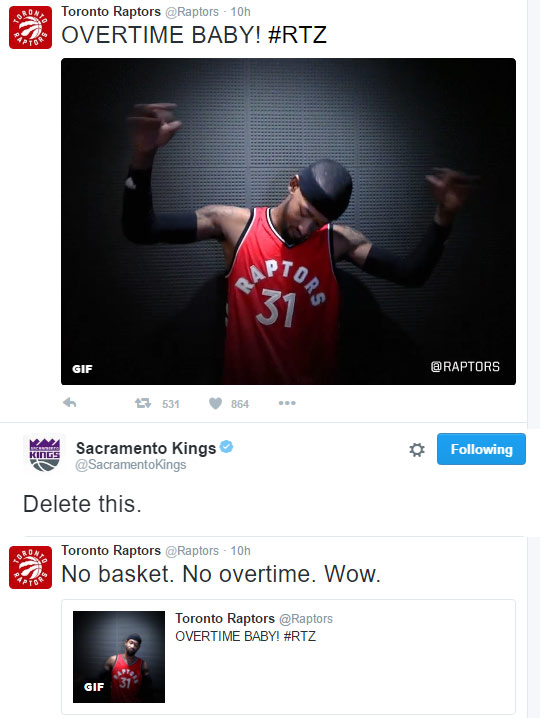