Probably not, but if you were a Seattle SuperSonics fan in the late 90s, I bet you remember when Seattle gave him a franchise-killing 7-year deal worth $33.6 million. Those apples might not sound so shocking now, but at that time, that contract for a guy averaging 2 points, 3 rebounds and 2 blocks a game was ridiculous — almost as ridiculous as the Sonics thinking he was going to be a “Shaq stopper.”

So how did the investment pay off?

Jim averaged career-highs in his first season with the Sonics….4 points and 4 rebounds with 2 blocks! His contract also pissed off Shawn Kemp so much, the Reign Man was a no-show for training camp and was soon traded for Vin Baker. Oh, and as for stopping Shaq… 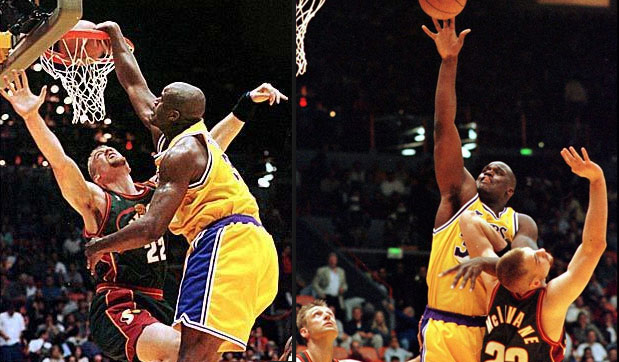 The Sonics also traded Mcilvaine to the Nets (Don MacLean & Michael Cage) after just two seasons and he was out of the league after three more — one year before the Nets were swept by Shaq and the Lakers in the NBA Finals.

BUT, for what it’s worth ($33.6 million), he can say he once blocked Michael Jordan

I can’t talk about Mcilvaine and not bring up this poster dunk by Grant Hill.