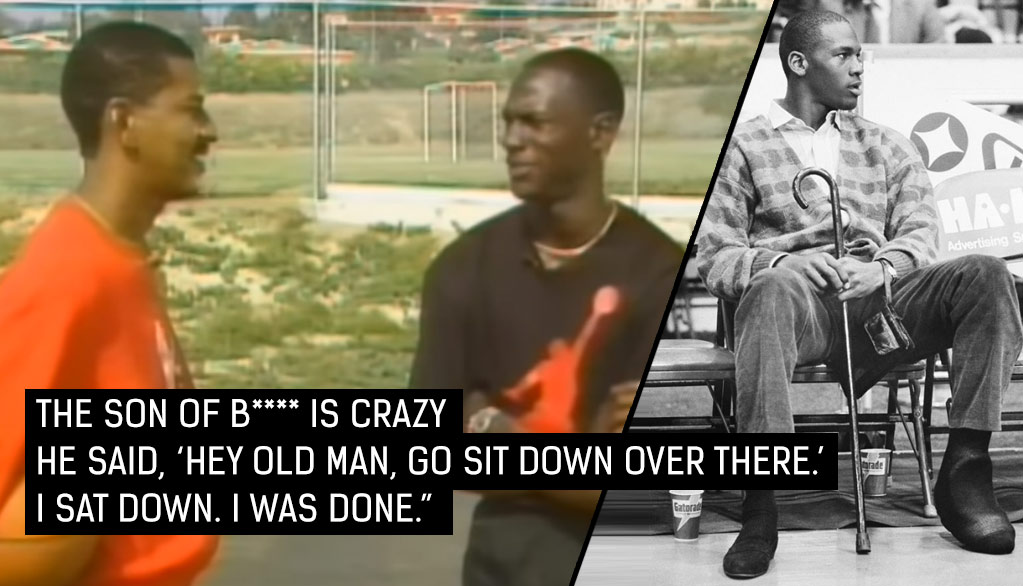 One of the most fun interviews I’ve ever done was with the legendary George “Iceman” Gervin. It was at a Gatorade event where they literally tried to build everything out of ice and even had fake snow blowing onto a basketball court. Crazy right? It was really crazy because the event was in hot ass Houston, Texas!

Flashback to 1985, one day before the start of the season, the Bulls trade David Greenwood to the Spurs for the 33-year-old Gervin. Why? They were hoping he was the answer to their back court issues and could be a mentor for their second-year superstar named Michael Jordan. Not only did the young Jordan not want any advice from Gervin, he didn’t even want him on the team.

“I have no comment on the trade,” Said Jordan when asked about the trade. “Just say I am unhappy”

He was unhappy because he thought the guy who lost his job to Alvin Robertson and Wes Matthews was going to steal his shine and take his shots (he had Orlando Woolridge trying to do that). He also considered Gervin as part of the All-Star crew responsible for the infamous “MJ Freeze Out” in the 1985 NBA All-Star game.

The two only had to deal with each other for three games at the beginning of the season. In those three games, Gervin struggled to reach double figures and Jordan picked up where he left off from his rookie of the year campaign: 29 in a win vs the Cavs, 33/7/6/3/2 in a win vs the Pistons and 12 points in just 18 minutes against the Warriors. He only played 18 because he fractured a bone in his left foot in the second quarter, after jamming his foot into the court.

“I don’t feel too well.” Said Jordan to the Chicago Tribune. “I’ve never gone through anything like this before, and I don’t know how to deal with it. Right now, I can cry all night and wake up tomorrow and find out what it`s all about”

The “all about” was six weeks in cast. Bulls VP of Operations compared the loss to the Celtics losing Bird or the Lakers losing Magic Johnson and said the team should be alright as long as they don’t “try to compensate by going one-on-one.” In other words he was saying, “we will be alright as long as Orlando doesn’t try to be Jordan.”

The Bulls lost their next game with Woolridge missing 16 of 27 shots. In his first start with the team, Gervin played 28 minutes and scored 15 points. He followed that game up by playing 37 minutes and putting up the first of many 20 points wearing red and black. In his 13th game, he knocked down 15 of 18 shots for 34 points and four days later scored 32. The duo of Woolridge and Gervin were putting up a lot of points in the boxscore while the team was putting up a lot of Ls in the standings. After winning their first three games with Jordan, the Bulls lost 15 of their next 19 games. One of those wins came against the Spurs as Gervin scored 21 against his old team and the Bulls bench of Quintin Dailey and Sidney Green put up 27 and 20. It was the rare case of the Bulls playing team basketball…and it helped that Woolridge fouled out after only taking 12 shots.

Gervin’s best game came on January 27th against the high-scoring Dallas Mavs: 45 points, 7 boards and 3 assists. It’s a game he will always remember because Jordan said to him, “What happened old man, you get tired?” Gervin replied, “Young fella, I was just showing you how I used to be.”

A little over a month later, against the wishes of team doctors and Bulls owner Jerry Reinsdorf, Jordan — who accused Reinsdorf of wanting to tank the season — made his return to the court with a minutes restriction. After putting up 20-point games while playing just 16 minutes, the Bulls (or should I say Jordan) increased his minutes to 20 something, then 30 something and his point totals did the same. At the same time, Gervin’s minutes dwindled from the 30s to the 20s to the teens before the playoffs.

In the playoffs, the Bulls faced Larry Bird and the Boston Celtics in the first round and were swept in three. Gervin played a total of 11 scoreless minutes as Jordan put up 49 in Game 1, 63 in Game 2 and 19 points, 10 boards and 9 assists in Game 3. Gervin knew his time with the Bulls and in the NBA was up.

When asked in a 2017 interview with The Post Game if he thought about returning to the Bulls, Gervin said, “Hell no. I ain’t think about playing no one. I went overseas.”

But it wasn’t just the games that made him realize it was time to move on, it was the practices with Jordan.

“The son of a bitch is crazy. He played just as hard at practice as he did in the game. I’ll never forget it, I’m at practice with him one time, I’m lackadaisical going through it and stuff. I say, “Dang, young fella.” He said, “Hey, old man, go sit down over there.” I sat down. I was done. He helped me understand I was done. You’ve only got so long to be on top. I was on top for about 12 years. You only have your turn. My turn was pretty much up. I retired after that.

Three years after his time with the Bulls, Michael Jordan interviewed Gervin for this awesome episode of ‘Greatest Sports Legends.’

And almost three decades after this interview, I had the honor of interviewing Gervin and talking about his final days with that ‘crazy son of bitch.’ But my favorite story from that interview had nothing to do with the GOAT, it was all about chicken!

My favorite story about Gervin happened during a game between the Spurs and Pacers in 1980. Indiana held a promotion saying everybody in the building would get free chicken if the Pacers could hold Gervin to under 30 points. Gervin took this as a challenge, especially since the man assigned to him was Dudley Bradley aka “The Secretary of Defense.”

So how did the Secretary do against Ice?

Gervin dropped 25 points in the first half and while he walked to the lockers at the half, he was yelling “No chicken tonight” to the crowd, even though he still needed 5 more points.

Did he get 5 more in the game?

He had 30 more and finished with an arena record of 55. Bradley fouled out with 6 points.