November 24th of 2015 was a historic day for the Golden State Warriors and Kobe Bryant: After beating the Lakers 111-77, the defending champs became the first team in NBA history to start the season 16-0; After shooting 1-14, Five-time NBA Champion Kobe Bryant had the worst shooting night of his 20-year career. As we know now, the feelings the Warriors and Kobe felt at the end of this season couldn’t be more different from this day and from each other: The Warriors would go on to set the record for most wins in a NBA season (73 wins) and then lose a 3-1 lead in the NBA Finals to LeBron and the Cavs; Kobe’s season and NBA career ended with a ridiculous 60 point performance, which included a 23-point 4th quarter.

The reason why this turkey Kobe had before his 2015 Thanksgiving is considered his worst shooting performance ever, even though he once shot 1-14 against the Spurs in 2014, is because 3 of those 13 misses were airballs and all of this happened in just 24 minutes. If he would have played the fourth quarter, it’s more than likely he would have improved his shooting percentage and possibly even had a vintage Kobe 4th and ended up with 24 points instead of four points, but it wouldn’t have changed the outcome of the game in any way.

“I could have scored 80 tonight, it wouldn’t have made a damn difference,” Bryant said after the loss, which gave the Lakers a 2-12 record. “We have bigger problems. I could be averaging 35 points a game. We’d be what?: 3-11. We’ve got to figure out how to play systematically that’s going to keep us in ballgames.”

Another interesting note about this game was the Warriors were coached by former interim Warriors coach and current Lakers coach Luke Walton.

“He’s one of the greatest players to ever play the game,” Walton said. “He’s used to it and we’re all used to seeing him at a level that’s above everybody or above most players in the NBA.

“It was definitely different seeing him go 1-for-14, but I try to focus on the fact that it’s still great to see him out on the court playing in that Lakers uniform, finishing his career with that team.”

Although Walton’s NBA career ended with a short stint with the Cavs, it looks like the Lakers’ coach now has the opportunity to end his NBA career with the same team that drafted him…just like Kobe. 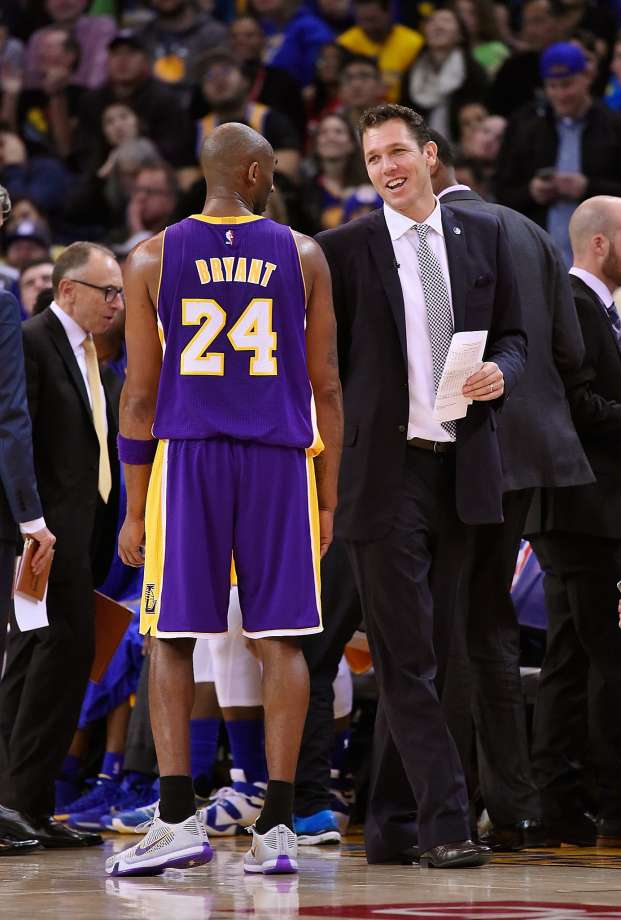 WORST SHOOTING PERFORMANCES EVER BY A LAKER

So, was Kobe’s 1-14 shooting the worst in franchise history? In the past 30 years, only Larry Drew has had a worst shooting night (1-16 in 1990). During that same year, Drew’s teammate Michael Cooper shot 1-14 against the Blazers and in 1996, Kobe’s teammate Nick Van Exel matched Kobe’s worst with a 1-14 performance against the Raptors.  All five of the 1-14+ games ended with a L for the Lakers.

If you were wondering if any Lakers have ever put up a donut while attempting at least 10, the answer is three: Vlad Radmanovic, Jeremy Lin and Devean George.