When Michael Jordan retired (for the second time) after “accomplishing everything he could” in the NBA, the GOAT said he was 99.9% sure he will never play in the league again. But like Jim Carrey in Dumb and Dumber, some people — like myself — stayed optimistic with those odds.

Then on September 25th of 2001, after months of rumors and foreplay, a 38-year-old MJ made the comeback official by signing with the Washington Wizards.

“I am returning as a player to the game I love,” said Jordan, who was donating the first  year of his $1 million salary to the victims of 9/11. “I am especially excited about the Washington Wizards, and I’m convinced we have the foundation on which to build a playoff-contention team.

“The opportunity to teach our young players and help them elevate their game to a higher level, and to thank the fans in Washington for their loyalty and support, strongly influenced my decision.”

“The greatest player in the history of the game is joining my team, and for that I am extremely honored and pleased.” said an ecstatic Pollin.

Jordan did drop 50, Laettner did have his best statistical season in three season and Kwame Brown became known as the biggest bust since Sam Bowie, who was drafted before Michael Jordan.

Jordan was originally planning on making his comeback announcement a day earlier but due to a licensing issue between him, EA Sports and the NBA, they had to come to a financial settlement before he could announce his return.

As a player, Jordan had opted out of the league’s group licensing agreement since 1992, though the league retained the right to license his name, number and likeness for uniforms, trading cards and posters. Under the league’s current collective bargaining agreement, which took effect after Jordan’s retirement in 1999, the NBA has gained the right to use the name, likeness and jersey numbers of all players for use on video games, as well.

That became a stumbling block for Jordan, who intended to announce his return to the NBA on Monday. He had an existing five-year licensing agreement with EA Sports, which had used Jordan’s image in its video games.

On October 11th of 2001, Michael Jordan scored 8 points in 17 minutes during a loss to the Pistons in one of the most anticipated pre-season games in NBA history.

10 days later, in front of a MCI Center crowd of 20,674, Jordan reminded the league why he’s the GOAT, when he went off for 15 points in 5 minutes against the Nets and finished with 41 points.

“It’s been awhile since I got in that rhythm three years ago,” said Jordan after his 33-minute home debut. 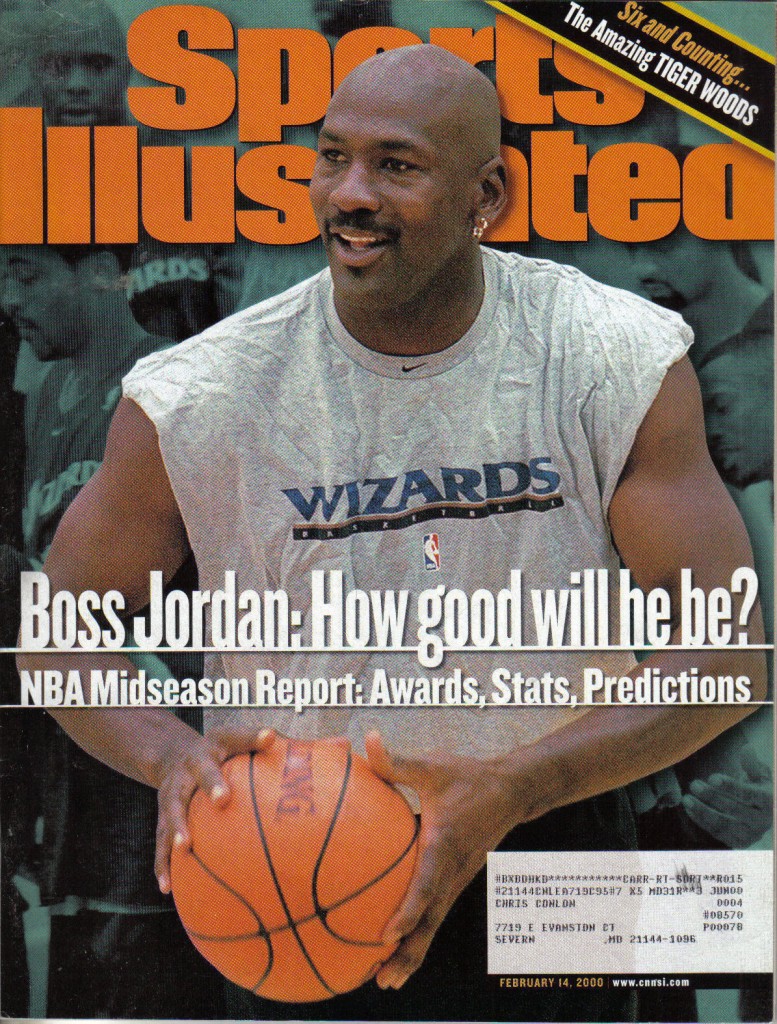 This 2000 issue of Sports Illustrated will probably rank as one of the least favorite Jordan issues among MJ fans but it’s my personal favorite because it’s the first major publication to feature a project of mine: I created and ran a site called TheDunk.com from 1998-2001. It was unofficially the 2nd website (NBA.com was first) to feature NBA videos on the internet. As excited as I was to see my work featured in Sports Illustrated, I was more excited that it was in an issue with “Boss Jordan” on the cover.