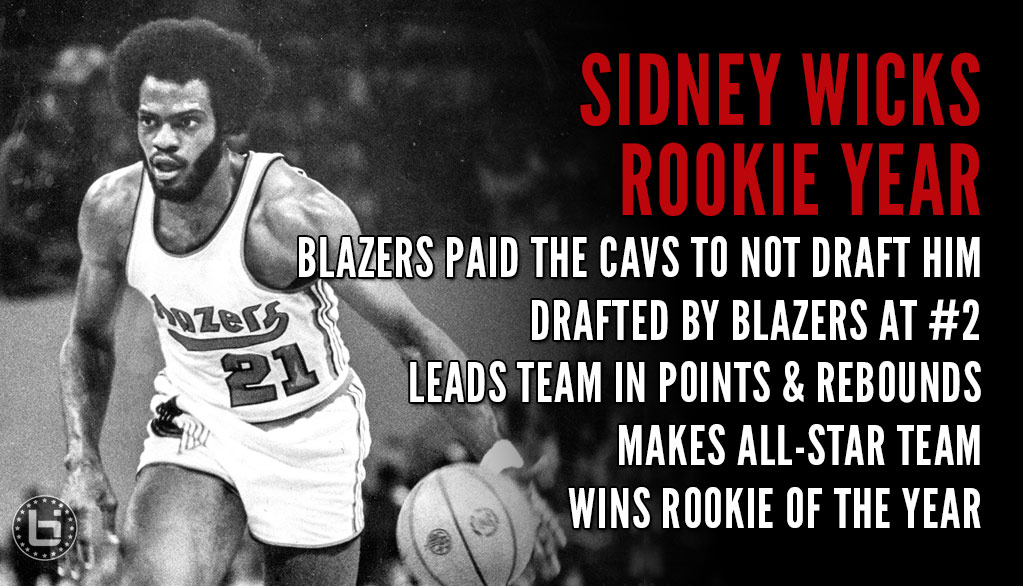 Despite drafting hall of famer Bill Walton in 74 and Mychal “Klay’s Dad” Thompson in 78, the Portland Trailblazers aren’t known for using their top picks wisely: Taking Sam Bowie over Michael Jordan and Greg Oden over Kevin Durant will always be known as two of the worst draft decisions ever (although I understand the Bowie pick). But in 1971, the Blazers got creative and ended up with the #1 pick in the draft even though they had the #2 pick. How? Everybody knew the Cavs were going to take UCLA superstar (3 x NCAA champ) Sidney Wicks with the first pick (which was decided by a coin-flip) so the Blazers made the Cavs an offer they couldn’t refuse: they paid them $250,000 to select Austin Carr instead of Wicks. Cleveland being Cleveland took the deal, the Blazers selected Wicks and then watched him become an All-Star and lead the team in scoring (22 points and 10 boards a game) on his way to a Rookie of the Year award.

“He was the prototype of power forwards today,” says former teammate Lionel Hollins. ‘He was big, could run the court, shoot, post up, pass, put the ball on the floor. He could do it all as a player, and he played hard.”

He could do it all except get along with teammate and All-Star scorer Geoff Petrie. And just like an early version of Shaq and Kobe, Wicks voiced his frustration with his teammates (mainly believed it was all directed at Petrie) to the media (radio!) and after 4 All-Star seasons in 5 years, he left Portland in a similar way he entered it – by being sold.

The Boston Celtics bought him and as fate would have it, Portland won a championship that season without him. After 2 underrated seasons with the Celtics, which included a SI cover appearance, he was sent to the Clippers in a mega-deal that landed Tiny Archibald and a draft pick – which turned out to be Danny Ainge.

Wicks played a couple of forgettable (surprise, surprise) seasons with the Clippers before taking his talents to Italy.

Wicks never became that NBA great everybody thought he would become after his great collegiate career and one of the best rookie seasons ever, but at least Portland can say they got the most out of him and got him by making a NBA draft steal. When is the last time anybody said that about the Blazers on draft night (the answer is 2012, when they traded Gerald Wallace for the draft pick that became Damian Lillard)?

And Wicks still looks like he could beat the crap out of Petrie.