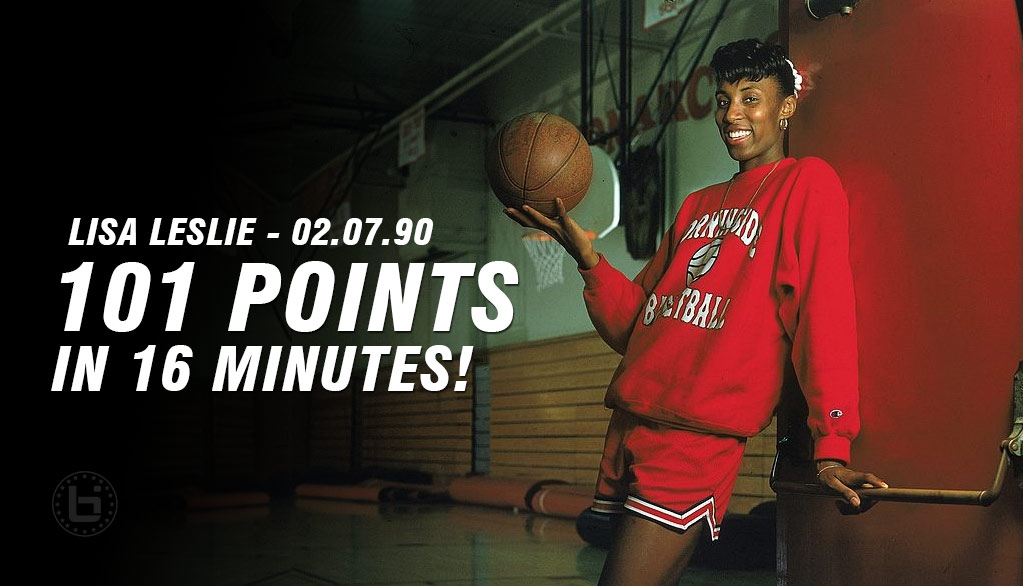 Ask the casual male basketball fan about Lisa Leslie and they will probably say she was the first lady to dunk in a WNBA game. That’s the equivalent of asking about Dr. J and a person saying he was the first player to dunk from the free-throw line.

But if you want to bring up a single moment to show how unique and dominant Leslie was as a basketball player, then talk about the time she once scored 101 points in a high school game! In the first half of that high school game!

The date was February 7th of 1990 and the game was between Leslie’s Inglewood Morningside High vs South Torrance High. Leslie came out blazing, scoring 49 points in the first quarter and 52 in the second, giving her a total of 101 and her teammates a total of 1; The opposing team only managed to score 23.

“The points I scored weren’t easy,” said Leslie, who made 37-of-56 shots and 27-of-35 from the charity stripe in just 16 minutes. “There were not a whole lot of layups. They sent all five players after me the whole game, and I tried not to pay attention to it.”

The whole game would end up being just one half as South Torrance’s coach refused to bring his team — just four players since two fouled out guarding Leslie — out for the second half.

A disappointed Leslie, just four points away from breaking Cheryl Miller’s record of 105, asked the Torrance coach if they could take the court just long enough for her to score three more baskets. As expected, the opposing team had no interest in extending the embarrassing game for them.

“I was kind of heartbroken that I didn’t break the record,” Leslie said after the game.

23 years after this night, just a couple of weeks after Kobe Bryant scored 81 points in an NBA game, Epiphanny Prince of Murry Bergtraum High School broke Miller’s record by scoring 113 points in a 137-32 victory.

But don’t feel bad for Miller or Leslie. They might not have this record but they have a resume very few people can touch.