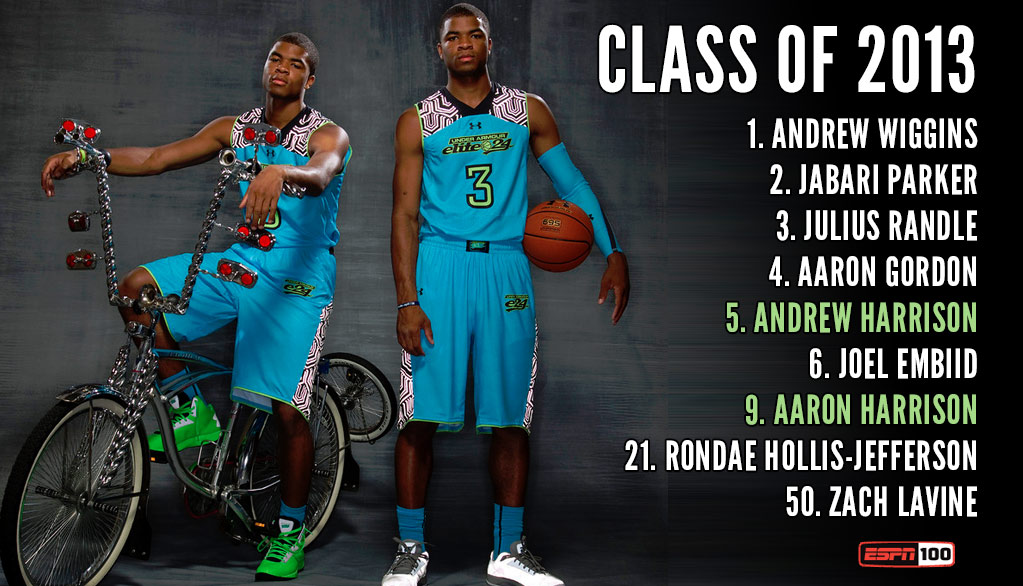 As much as I love Dominique Wilkins and as lovely as the Gonzalez Twins are, Andrew and Aaron Harrison are probably the hooping twins I have had the most fun watching. Maybe that’s because I hated most of the teams Gerald Wilkins played on, I’ve never had the opportunity to watch Dylan or Dakota play, and the Harrison Twins literally played in my backyard at Travis High School in Richmond, TX.

Living a few miles from their high school also meant I was constantly hearing about them in the local papers: Twins lead Tigers to Class 5a state title; Aaron named Texas Mr. Basketball;  Andrew Harrison ranked #1 guard in the nation; Aaron Harrison has made 12 game-winners in his final year of AAU ball; Twins will take their talents to Kentucky; Twins save baby from apartment fire. I obviously made up one of those, but we have seen them take turns catching fire in high school and we also had the pleasure of seeing them both shoot lights out in the 2012 Elite 24 game, alongside their future Kentucky teammate Julius Randle.

Randle turned out to be the star of the show by scoring 27 points on 13-of-14 shooting, while Aaron, who shared co-MVP honors with Randle and Aaron Gordon, connected on 11-of-14 shots for 25 points. Andrew wasn’t too shabby either with 4-of-6 shooting and a team-high 6 assists. The trio also shined during the Elite 24 Midnight Run against NBA stars like Brandon Jennings, DeMar DeRozan and James “got crossed by Andrew” Harden.

The bright lights followed them to Kentucky, where Aaron became a Wildcat legend after hitting two memorable game-winning 3-pointers in the 2014 NCAA tournament. And after two years on campus with disappointing tournament endings, he and Andrew declared for the NBA draft. Andrew was selected in the 2nd round by the Phoenix Suns and Aaron went undrafted. But, it would only be a few days until the Hornets called and invited Aaron to the summer league, where he rewarded them with 16 points and 8 assists in a 17-point comeback victory.

Going into the 2016/17 season, the Twins are no longer the headliners they were back in high school, but they are still on NBA rosters — Aaron with the Hornets and Andrew with the Grizzlies — and one thing I know and have known about them since high school is they aren’t afraid of taking the big shot. So, when that big shot comes, I expect them to seize the opportunity and make it.