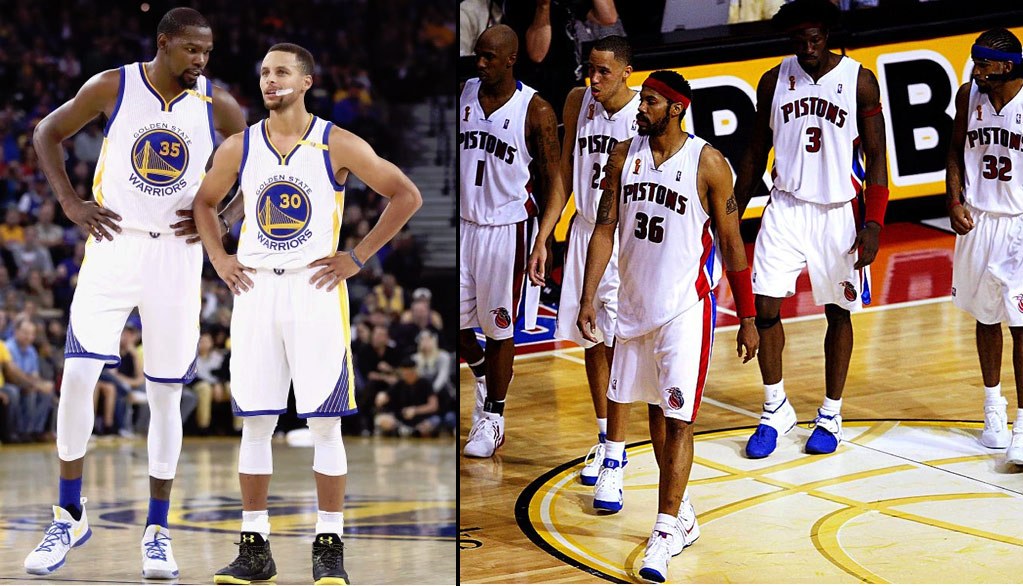 Here’a shocker, another former All-Star from a Championship team thinks that team could beat the current Warriors. Richard “Rip” Hamilton of the 2004 Detroit Pistons is the latest.

When asked by CBS Sports’ NBA Crossover about his defensive minded squad — including big shot Chauncey Billups, 4 x DPOY Ben Wallace, Rasheed Wallace and Tayshaun Prince — taking on Golden State’s Death lineup, Rip said, “It would be no comparison. We can guard every position. Every guy from our point guard to our five, can guard any position. We were big. We were long.”

The longest of their long, Tayshaun Prince, agreed…depending on the rules.

“It depends on what the rules are.” Prince said. “Because back when we played, we could play hands-on, physical. As you can see from the Pacers rivalries and all of the rivalries we had back in the day, we were scoring in the high 70s, low 80s. We were physical. So now if you play this style of play, where they’re running and gunning and touch fouls and things like that, all of sudden we would start getting in foul trouble because back when we played, we were very, very aggressive on defense.”

Very aggressive is an understatement and since it’s kind of pointless for me to argue the hypothetical question about them vs the Warriors’ new superteam with Kevin Durant, let’s look back at a few reasons why they were able to beat the Lakers super team and their new additions of Gary Payton and Karl Malone.

If you were a betting man in 2004, you could have become a very rich man by betting against the Lakers and on the Pistons during the 2004 NBA Finals. So how did these underdogs pull off the biggest upset in finals history?

The number one reason you are going to hear is Karl Malone was injured (sprained MCL in game 2). He did play in Games 3 and 4 but outside of his rebounding, he wasn’t much of a factor. He also wasn’t much of a factor in Game 1, when he scored 4 points and was barely giving the Lakers double-figure scoring throughout the playoffs. He sat out the final game of the series and the Lakers scored the most points (87) in a non-OT game during that series.

The other reason, which Latrell Sprewell pointed out during a recent appearance on Michael Rapaport’s podcast, is the shooting of Kobe Bryant. Bryant, who shot poorly for the majority of the 2004 playoffs, made just 38% of his shots against the Pistons and he shot the ball a lot, while Shaq complained about not getting the ball enough. Did Shaq deserve the ball more since he was going against Ben Wallace? In Game 4, Shaq only put up 36 points and 20 boards against Wallace as Kobe shot 8 of 25!

Malone’s injury did hurt and Kobe’s shooting was painfully awful but the main reason why the Pistons were able to beat the drama-filled Lakers that season is because they didn’t have drama and they knew how to play like a team with chemistry and understood roles. And because their style of play and defense was a nightmare for teams that thought they could win with just offense.