The streak is over. Not just Russell Westbrook’s streak of seven triple-doubles but his streak of shooting under 50%. During Sunday’s win over the Celtics, Westbrook scored a game-high 37 points on 14 of 26 shooting (.538%), which is the first time in 11 games he has made half of his shots; 23 of those 37 also came in the 2nd half, which included a tie-breaking layup, a jump ball win and a free throw in the final 30 seconds of the three point victory.

“Honestly, I’m just happy we won tonight,” Westbrook said, when asked about the triple-double streak. “That’s the most important thing. As a player, I always try to look forward. Maybe at the end of the season, I can talk about it, but as of right now, my job is to move forward and get ready for Portland.” 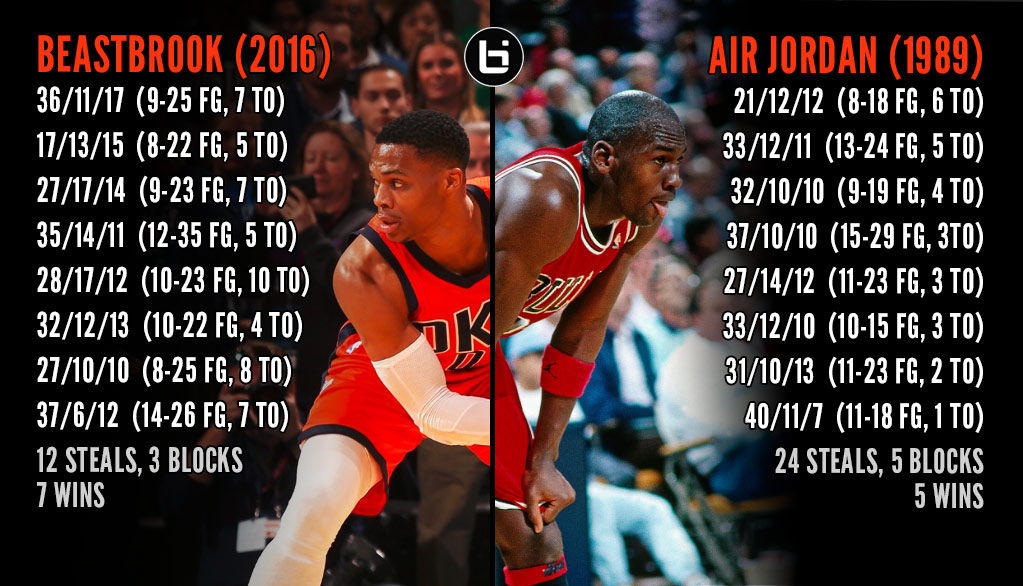 Westbrook streak of seven ties him with Michael Jordan (1989) and Oscar Robertson (1961) and leaves him two behind Wilt Chamberlain. So how did his non-triple-double performance compare to Jordan’s in 89? Jordan had 40 points (11 of 18 shooting), 11 assists, 7 rebounds, 2 steals and 1 turnover in a two-point loss to the Bad Boy Pistons. With the exception of the turnovers (7 to 1), the numbers were pretty similar but since Westbrook’s Thunder got the win, I’m going to give the W to Westbrook.

Worth noting, Jordan followed up this game with these three triple-doubles.