Princeton Senior Jackie Young got an early Christmas present last week. The gift came in the form of a congrats tweet from Skylar Diggins after Young dropped 42 in a game and surpassed Diggins’ (#3) on the all-time Indiana High School scoring list. What makes this tweet so special – besides Diggins being one of her role models – is Young will be following in Diggins foot steps and attending Notre Dame next year. 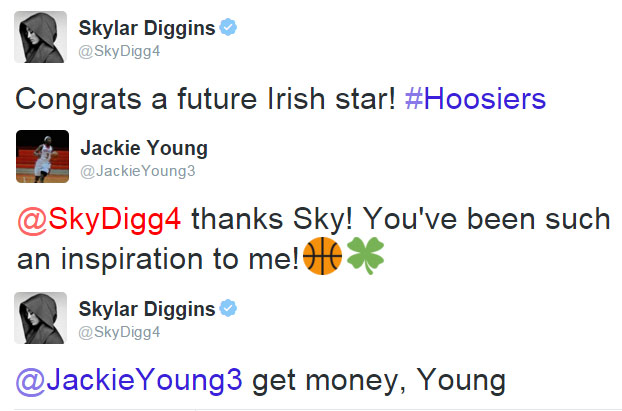 Then on Saturday, Young moved past Indiana high school great and current WNBA coach of the Indiana Fever, Stephanie White (#2), on the IHSAA list after putting up 48 points (24 in the first quarter) and 9 rebounds in a 29 point win over Mount Vernon at the Toyota Gibson County Teamwork Classic.

“Being talked about with Stephanie White, who played in the WNBA, and Skylar Diggins who also played at Notre Dame and in the WNBA is incredible,” said Young.

She is now 216 points away from passing Shanna Zolman (3,o85) and becoming Indiana’s all-time scoring leader. And considering she’s averaging 38 a game – while still averaging 6 assists – it probably wont be long until this milestone happens.