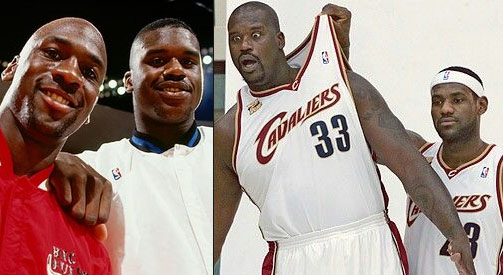 O’Neal, visiting Hong Kong to promote an energy drink, faced both Jordan and James in their prime and when asked who would win a hypothetical match-up, he didn’t hesitate.

“It would be an interesting game,” said O’Neal. “Young LeBron was more like (Lakers Hall of Famer) Magic Johnson. He was sort of like Magic with Jordan’s abilities. He liked to pass, and he liked to get it up.

“But Mike was Mike. He was just special, like no one else. He always did things no one else could do, and things you couldn’t compare to anyone else. So he was special, and he’d win.”

Shaq also gave props again to his favorite player of all-time, Julius Erving, by saying “he was the best.”

“I’ve seen young Mike and young LeBron and I must say Dr. J is still my favourite player,” said O’Neal. “A lot of people today don’t even mention his name but to me I still think he was the best. But these are questions that we’ll never know the answer to.”

His fondness for Dr J might surprise a few, but if you know much about Shaq then you know he’s always picked the Doctor as the best. He even rapped about him on the song “Outstanding” off his debut album.

Remember when you asked me this one day
Who I wanna’ be like, I said Dr. J
Then you said, Good, now you gotta’ go
Take the damn ball and slam it through the hole.