One of the most upsetting things I constantly hear from kids is “Hakeem Olajuwon dominated Shaquille O’Neal in the 1995 NBA Finals.” Those kids are thinking about David Robinson, not Shaq! Or, they are just assuming since the Orlando Magic were swept, Shaq was a no-show.

Me and Tracy Murray — a member of the 95 Championship Houston Rockets — talked in-depth about the series yesterday and how Hakeem may have been consistently great in the series but it was the role players for the Rockets that stepped up in every game (while the role players for the Magic disappeared and choked) that won the Rockets their second championship in two years.

For Houston, we had Kenny Smith hitting a three with 1.6 seconds left to put the game into OT after Nick Anderson missed four (not one, not two, not freaking three, but fucking four) consecutive free throws. Dennis Scott was MIA for Orlando on offense and defense (he was always MIA in this category), while his man, Clyde Drexler, was putting up big numbers and leading the team in assists. The Magic bench was non-existent while the Rockets had Sam Cassell scoring 30 off their bench. Then we have Robert Horry, who was 2nd in Finals MVP voting, setting multiple NBA Finals records for 3’s and steals. Besides putting up roto-God stats, he sealed Game 3 with a three in the final 20 seconds of the game.

I had this same conversation with Mr. Big Shot Horry a couple of years ago. Even though he said he would take Hakeem over Shaq (who he also won 3 rings with), he was in agreement that Hakeem and his impressive 33/12/6/2/2 average in the Finals did not “dominate” Shaq and his almost as impressive 29/13/6/0/3 average, which included a 26 point, 16 rebound, 9 assist Game 1 and a 33 point, 12 rebound, 7 assist Game 2.

Another thing that both former Rockets were obviously in disagreement with me about (although Horace Grant agreed with me) is my statement that the Magic would have won the series if Nick Anderson wouldn’t have missed those free throws at the end of Game 1. I thought it changed the mindset of both teams. Both players said that the Clutch City Rockets was such a poised and complete team they weren’t even nervous when they were down by double figures in Game 1 — Clyde Drexler denies this.

HAKEEM VS SHAQ: THE REMATCH A month after the NBA Finals, Taco Bell put together an interesting “secret campaign” with Shaq and Hakeem that started with a one-page ad in the USA Today. The full pager was a one-on-one challenge from Shaq to Hakeem that the mass public actually took seriously. A week later, Taco Bell let the public know the letter was just a promotional piece for an upcoming Pay-Per-View one-on-one game between the two centers for a million dollars.

“It’s just us. No Andersons, no Hardaways, no Tomjanovich, no Brian Hill,” O’Neal told the LA Time about the event, which will feature a 12-second shot clock and even a six-point shot.

Due to a “sore sacroiliac from lifting weights,” Hakeem backed out of the event a day before the event was supposed to happen.

Taco Bell thought about trying to find a last-minute replacement and everybody from Alonzo to a tag-team of Mugsy Bogues and Spud Webb were considered. They ended up just canceling the event and refunding the estimated million dollars in buys. Shaq was disappointed, I was pissed and promoter Donald Trump hinted the NBA was to blame.

“There’s a rumor out there that the NBA had something to do with it. But it’s just a rumor,” said Trump to the LA Times.

(UPDATE: In 2016, I asked Hakeem what happened to the event and he said he couldn’t remember. Before I could follow-up that question with a prediction, Robert Horry interrupted and said, “he wanted more money.”)

I wasn’t just pissed because I wanted to see Shaq dunk on Hakeem like he’s already done five times in three seasons, I was looking forward to the opening acts: Nick Van Exel vs Kenny Anderson and rookies Joe Smith going at Kevin Garnett.

Since the event never happened and people don’t remember regular season games (where Shaq usually outplayed Hakeem), the only thing most people have is boxscores, YouTube clips and the misconception that Shaq was dominated by Hakeem for four games in 1995. A thought that’s as ridiculous as these Taco Bell commercials with Spike Lee.

I still have my Taco Bell cups promoting the event. pic.twitter.com/BoW4fnhRAD 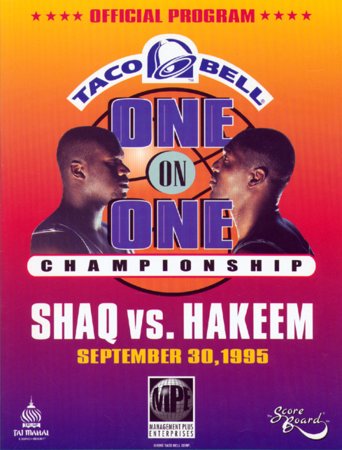