You know that game Six Degrees of Kevin Bacon? Well, Six Degrees of Shaq is easier to play considering he’s played for six teams over his 19-year career. Considering he’s also done so many movies, commercials and rap albums, you don’t even have to stick with basketball players to play this game. For example, Shaq was in ‘Blue Chips’ with Nick Nolte, Nolte was in ’48 Hours’ with Eddie Murphy, Murphy was in ‘Nutty Professor’ with Dave Chappelle, Chappelle was in ‘Undercover Brother’ with the hot Denise Richards and she was in ‘Wild Things’ with Kevin Bacon.

During ‘Inside the NBA’ after the collapse of one of Shaq’s former teams to another former team of Shaq, they showed a mind-blowing graphic showing Shaq has had a teammate on a championship team going back to 1984! The 1984 teammate was Boston Celtic Greg “Goon” Kite, who reportedly got into a fist fight with Shaq during Shaq’s rookie season in Orlando. Funny side-story about Kite. A friend of mine is friends with Kite and when he name-dropped Kite to another former NBA player (sorry, I can’t say his name), that player said, “If Kite was standing right here, right now, I would punch him the fucking face.”

Back to Shaq and the video above, the funniest moment came at the end when Shaq showed off his championship ring and asked Barkley if he knew what it was. When Barkley responded with a “yeah,” Shaq said, “no you don’t.”

This is also funny… 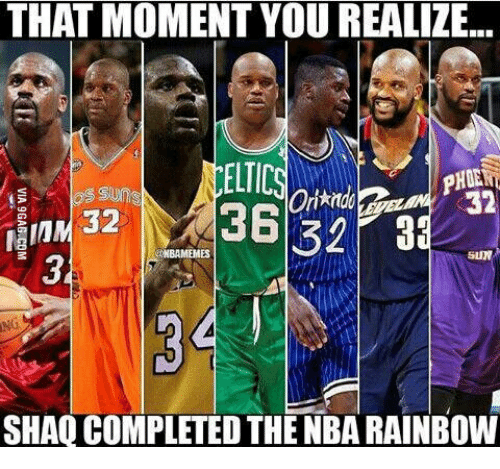