To prepare for the upcoming NBA 3-point shootout, Kenny Manye brought in some competitors for Curry to practice against.  The first competitor was Robert Horry (who I once lost a lunch bet to over a 3-point shot) and Curry had no problem destroying the 7x NBA champions’ score.  Now you might thinking why was Horry even in this contest since he “only hit game-winners.” Did you know Horry is 2nd in NBA history with career 3-pointers in the playoffs, 1st in the finals and his 7 3-point field goals without a miss is a NBA record?

The 2nd was former 3-point champion Tim Legler who also didn’t do so well but looked great back in 1996.

But the third and toughest competitor was 10 year old female hoop phenom Jaden Newman. Not only did little Jaden win 16-15 but she made Curry sign a school excuse slip that says “please excuse Jaden because she’s beating Stephen Curry in a 3-point contest.”

The last competitor was someone Curry has had plenty of shootouts with in the past – papa bear Dell Curry! Curry had the best score among Curry’s competitors but it wasn’t enough to beat Steph. Maybe they should play a game of P.I.G. instead.

Kenny Mayne also took a shot at Steph and just like me with Horry, Mayne ended up with the lunch bill. 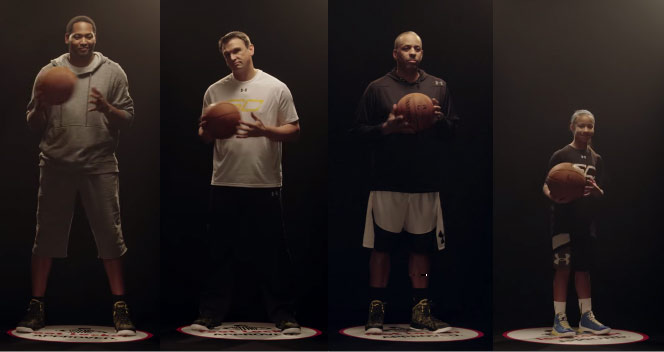