The slogan for start-up company CoachUp is “MVPs aren’t born. MVPs are made.” So it’s only fitting they would have MVP Steph Curry represent the company and star in their first commercial called “Action Speak Louder Than Words.”

Curry might be the darling of the NBA now — racking up awards and accolades while appearing on magazine and video game covers — but he was overlooked and undervalued by scouts and experts throughout much of his journey to the league. All you have to do is look at the following high school ranking image of Steph to either see how far he’s come or how wrong scouts were. Rivals had him as a 3-star recruit and didn’t even rank him within the state. We didn’t show him much love either and sadly have no Curry high school clips in our archive; We do have plenty of footage of other high profile guards from his high school class, who are no longer in the league or never made it. 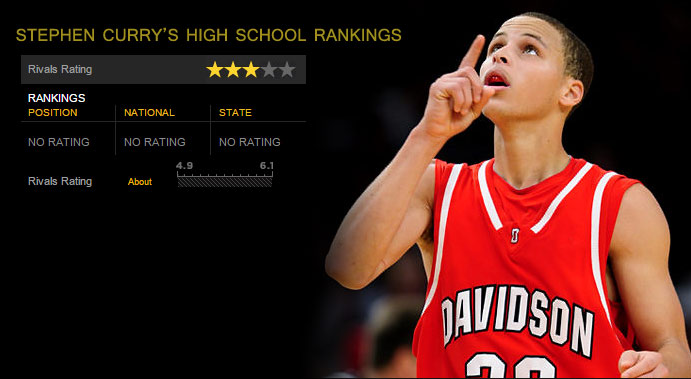 Speaking of players who never made it to the league, do you recognize any of these names: Lewis Witcher, Nigel Munson or Tyrone Appleton? I’m assuming no but those are the three players Virginia Tech — the college Steph’s parents attended — gave scholarships to instead of Steph.

With no offer from VT or any major school, Curry attended Davidson, where he would average 22 points per game as a freshman and take the team to the Elite 8. Despite an impressive showing in college, the draft reports still questioned his athleticism, ball handling and leadership.

“Stephen’s explosiveness and athleticism are below standard.” said a 2009 Draft report Curry read in the CoachUp commercial. “He’s not a great finisher around the basket. He needs to considerably improve as a ball handler … Stephen must develop as a point guard to make it in the league.”

Then came the 2009 NBA draft. A draft where the TWolves selected back-to-back point guards with the 5th and 6th pick and neither was named Stephen Curry. A draft that saw Curry become the 5th guard picked when the Golden State Warriors made the wise decision of picking up their future MVP and champion.

“Over the years, I’ve been doubted and questioned – my NBA scouting report represents what some ‘experts’ said about my ability,” said Curry in a press release for the CoachUp. “But, no matter what people said, I always blocked them out and kept training.  That dedication and commitment to the game I love, the long hours spent honing my skills one-on-one with my coaches, is what ultimately drove my success.”

SUCCESS IS NOT AN ACCIDENT

Here’s a great video by Coach Alan Stein of Stronger Team who did take notice of Curry back in high school, when he attended a Kobe Bryant Skills Camp.

“By the time the workout started, Curry was already in a full sweat from making 100 to 150 shots.” 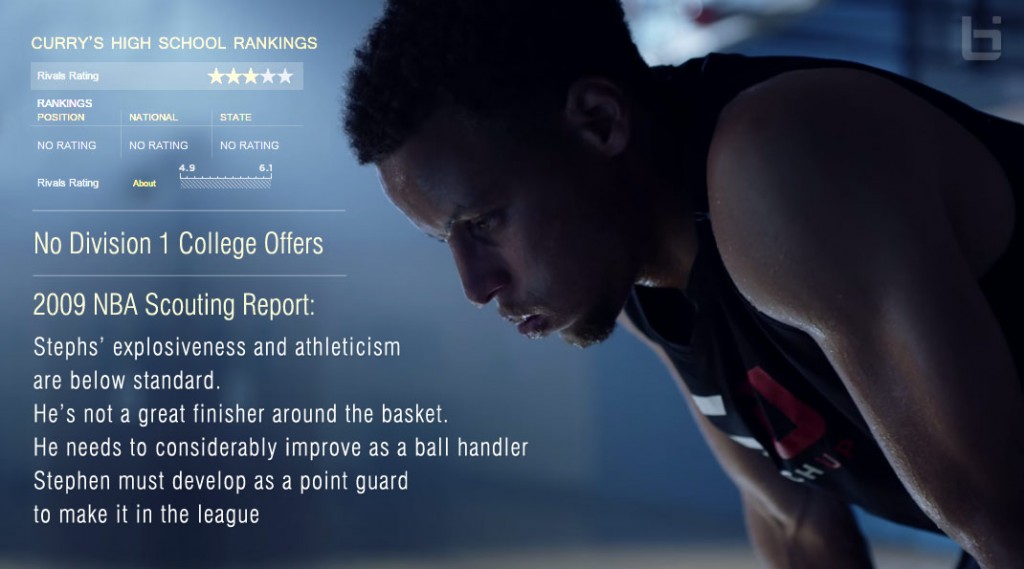