With a minute left in the first quarter against the Raptors, Steph Curry almost made the bench and Dub Nation crowd explode when he put DeMar DeRozan on skates before pulling up and MISSING (dammit!) the jumper – if this was an And 1 game 15 years ago, the crowd would have still rushed the court.  That’s OK, Steph hit plenty of other (much tougher) jumpers in the game and finished with a game-high 37 points and 9 assists in a close fought battle against Kyle Lowry (28/6/5) and the Raptors.

Steph also redeemed himself for his miss against DeRozan by putting Corey Joseph on skates and hitting a big 3 in the 4th to break a 98-98 tie.

And the later hitting this spin move and dagger on a faked-out Lowry.

As great as Curry played, the person who screwed Lowry the most in the game wasn’t Curry but the refs who made some questionable calls in the 4th including this offensive foul on Lowry when the Raptors were down by just 1 with with 15 seconds left in regulation.

“I don’t know what happened,” Lowry said. “I just know I got a call for offensive foul. It happens. It’s the NBA. The call went against me. That’s all I can say about it.”

I can say Lowry and the Raptors got some bad calls in the 4th but in the end it was the Warriors getting their 12th straight win to start the season which looks like another MVP one for the Chef. 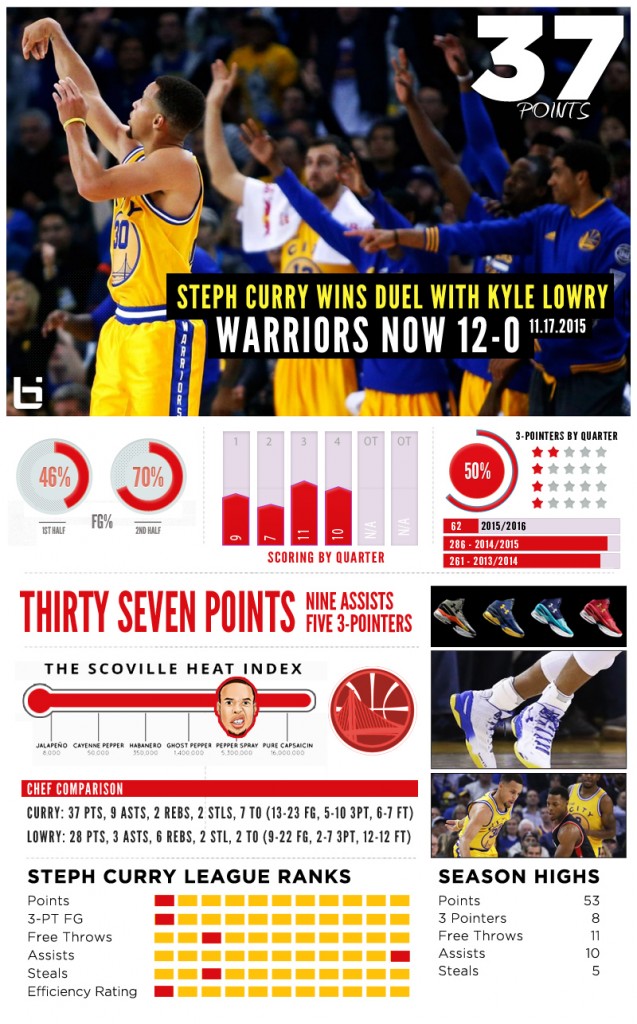