Neither Derrick Rose or Stephen Curry shot well or put up any stand-out stats against each other during the Warriors win over the Bulls on Saturday but it’s a hyped up match-up people love to see and discuss.

Rose only connected on 2 of 11 shots and was 1 for 7 from 3. Curry was 5 of 14 and just 1 for 5 from 3. Curry’s game-high 7 assists was 1 more than Rose’s team-high. Many of those assists for Curry went to Draymond Green who scored a career-high 31 points and hit as many 3-pointers (7) as the entire Chicago Bulls.

Although Rose didn’t make much of a statement in the game, he did make a statement during warm-ups when he wore a “I can’t breathe shirt” in honor of Eric Garner. 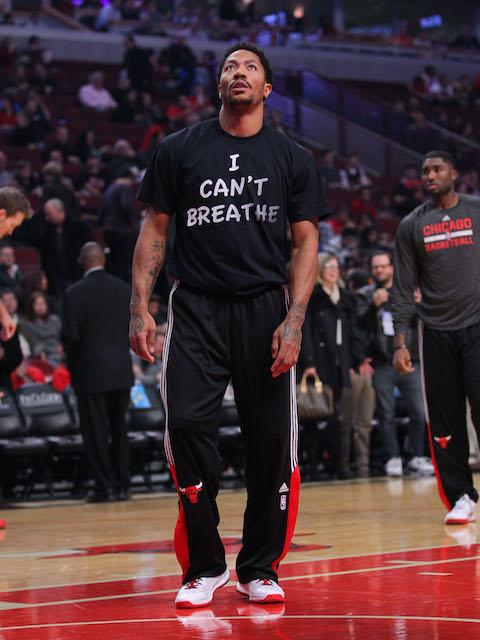 “I knew that Derrick was going to put that T-shirt on,” Bulls center Joakim Noah said. “I think he has every right to express his beliefs. He told me that he was going to wear it. I respect Derrick a lot. I think he’s definitely making a statement by wearing it. That’s my guy.”

“Yeah. If that’s what he wants to do, I respect it,” Noah added. “I think a lot of people feel that way. When you wear a T-shirt with a statement everybody’s going to know how you feel about it. I respect Derrick 150 percent and I’m riding with him … a lot of people feel that way. It’s really sad what happened. Police brutality is something that … it happens. Not every cop is a bad person. Not every black person is a bad person. You can’t judge people. But he definitely made a statement by wearing that T-shirt.”

“I thought it was great,” Gibson said. “I thought it was just him speaking his mind, speaking out. It’s a good thing for a positive movement. We just got to get back to just focusing on basketball. It was good for us, good for him especially, but it’s rough after you lose tonight.”