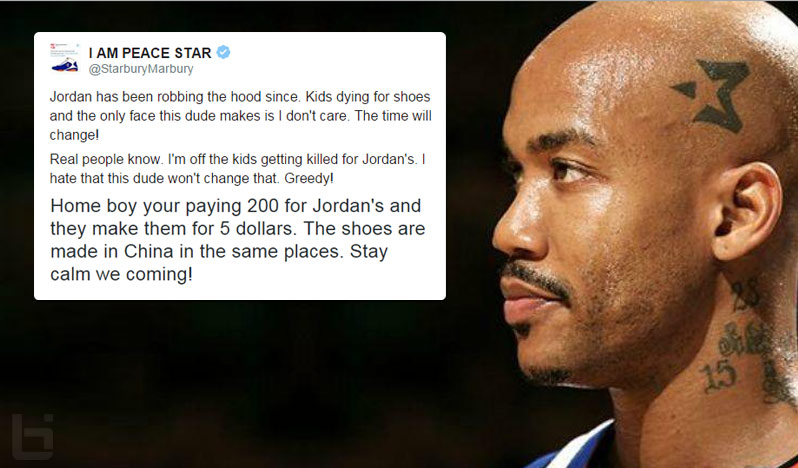 Former NBA player and current China Basketball legend Stephon Marbury is resurrecting his affordable Starbury sneakers and promoting them by calling out NBA and Sneaker legend Michael Jordan. The initial message came this past weekend when Marbury said, via Twitter, his $15 sneakers are made in the same place as $200 Jordan sneakers and that “Jordan has been robbing the hood” and not caring about “kids dying for shoes.”

Over the next few days, Marbury has been debating with “haters” and sticking to his guns that keep firing off shots at Jordan.

“Real people know. I’m off the kids getting killed for Jordan’s. I hate that this dude won’t change that. Greedy!”

Violence over sneakers hasn’t gotten any better since Sports Illustrated put out the “Your sneakers or your life” issue 25 year ago, but Nike has tried to come up with some solutions after a bunch of fatal incidents over the past couple of years.

In recent years, Nike has tried to quell tension by implementing RSVP and raffle systems that company heads said would make sneaker purchases safer. But little, if anything, has changed. In 2013, three men in Houston shot and killed a young father during a robbery. Just hours earlier, he purchased a pair of the newly released Jordan Gama Blue 11’s for himself and his son during the Christmas holiday season. The next year, an Ohio couple got pepper sprayed during the release of the Air Jordan XI and another young man lost his life during an altercation at a similar event.

Such has been the case for other expensive shoe brands. A Virginia teen was robbed for a pair of Foamposites. Around that same time, a Chicago-area man lost his life when someone took his $1,800 pair of Air Yeezys, a brand of Nike sneakers created by hip-hop superstar Kanye West.