Re-release of 1990 book titled “Swee’pea: The Story of Lloyd Daniels” brings to life the story of a 1980s basketball prodigy who was supposed to die young, but didn’t, and who wasn’t supposed to make it, but did. His story was quite powerful in an age before the Internet and social media and is a fantastic read for this generation’s basketball players, parents and lovers of the game.

Note: “Swee’pea: The Story of Lloyd Daniels” is set for re-release July 5 and can be pre-ordered on Amazon. For updates on the book and its release, visit the Sweepeathebook Facebook page.

It would be hard for a vast majority of today’s high school and grassroots basketball players to completely understand the trails and tribulations Lloyd Daniels, a supremely talented 6-foot-7 guard who mesmorized college coaches in the mid 1980s despite being a functional crack addict, endured to eventually make a NBA roster.

Daniels was a constant, hard-core drug addict. Today’s youth hear the word “crack” and think disgust or a bad disease from another time. “Crack head” more often than not is a derogatory term or a “put down” than a descriptive word to describe someone using that powerful form of cocaine or other hard drugs – and that’s a good thing. In reality, people that have experienced what crack cocaine can do rarely use the word “crack” out of respect for its powerful effect.

The crack cocaine epidemic was very real in inner-city neighborhoods like the East New York neighborhood in Brooklyn where Daniels grew up that was described in John Valenti’s and Ron Naclerio’s 1990 book, “Swee’Pea and Other Playground Legends: Tales of Drugs, Violence and Basketball”. Twenty-five years later, many of America’s largest inner-cities (sans Chicago) are much safer than they were a quarter century ago. In the re-release of his book (set for July 5), Valenti describes New Jersey Avenue in Brooklyn where “Swee‘pea” grew up as a neighborhood that has undergone a positive transformation, as have plenty of others in New York City and Los Angeles. Drugs and crime plagued Daniels’ ‘hood and he was not strong enough to escape it. Notice we did not say “not lucky enough” because Daniels had plenty of chances to escape those two dangerous vices.

Technology has advanced greatly over the past 25 years and so has the way in which the media covers elite basketball prospects. No longer do the exploits of star high school basketball players spread by word of mouth like it did when Daniels was creating a national reputation playing for various high schools and grassroots teams in places such as Las Vegas, the city where his basketball talent made him a legend, not to mention infamous, after a much-publicized 1987 arrest derailed plans for him to suit up at UNLV.

In 2016, elite high school players are public figures and most of their daily moves are chronicled on social media. Their accomplishments, as well as their missteps, are immediately known. In essence, today’s players can’t get away with things their predecesors could. In addition, college admission standards for student-athletes are much more stringent than they were in 1986 and breaking rules in order to successfully recruit the great player is more difficult because of that attention, not to mention political correctness.

Just imagine the nation’s top junior being a functional illiterate with a wicked drug problem playing at a public high school in the nation’s largest city with four newspapers chronicling his every move in 2016-17? We can’t either. Simply put, the things Daniels did, or someone did on his behalf, to circumvent the system would be hard to execute today, and quite frankly, rarely do we see elite players in today’s climate having the street savvy to pull it off because of the coddling nature of the grassroots industry.

Two things that haven’t changed in basketball over the last 25 years: One, talent is a narcotic and prodigies can get away with actions the lesser player can’t. Two, the number of people willing to help these talents is nearly endless, and many times that exacerbates the problems grassroots basketball faces.

“Lloyd Daniels is definitely one of the best grassroots players of all time, but what he could have been or where he could have ranked among the greats is the real story,” said Clark Francis of the Hoop Scoop, the publication Naclerio has been a long-time contributor to. “His story is the perfect example of what’s wrong with the system and how it can be manipulated.”

Francis is one of the many talent evaluators or college coaches we’ve talked to over the years about Daniels and all of them share the sentiment of Daniels being one of the best high school-aged players they ever saw. A tall point guard with a near mystical understanding of the game, Daniels could play the off-guard position or small forward and, before drugs wrecked his body, was also in the athletic range of his peers that size. Others who have raved about his abilities include Van Coleman of the Basketball Channel, travel basketball coach Ruben Luna and then Oregon assistant coach Morris Hodges.

All four of those respected basketball figures particularly recall his sensational performances in the summer of 1985 at Five-Star Camp or his run through the 1986 Las Vegas Invitational, in which he led the New York Gauchos to the team championship. Daniels reached legendary status in grassroots lore with his 24-point, 14-rebound,11-assist, 4-steal performance to knock off defending champ Mid-Valley ARC and its star players Sean Higgins and Chris Mills of Fairfax (Los Angeles) in the Las Vegas Invitational quarterfinals.

“We stuck around to watch the Gauchos-ARC game,” said Luna, whose NorCal Connection team eventually lost to the Gauchos in the semifinals. “Lloyd was so good I got my kids out of there at halftime. I didn’t want them to be scared for the game the next day.”

The late Jerry Tarkianian was mesmorized by Daniels’ talents and bucked the system to get him enrolled at UNLV in the summer of ’86 despite dropping out of Andrew Jackson (Queens, N.Y.) the day after the 1985-86 season concluded. The recruitment of Swee’pea (coined after the fictional character in the Popeye cartoon) was so rediculious he likely is the only player in history with more college than high school credits. We’re not joking.

Valenti (a reporter for Newsday) and Naclerio (the current coach at Cardozo High School in Queens) cover these fascinating anecdotes, including the derailed plans for Daniels to play at UNLV following his arrest at a North Las Vegas crack house in February 1987 and being shot during a drug dispute in Hollis, Queens, New York, in May 1989, in gripping detail. Many of Daniels’ friends, advisors, and those interviewed for the book, including his grandmothers, Lulia Hendley and Annie Sargent, seriously feared Daniels would die young. What were they supposed to think, considering a major thoracic wound from three bullets didn’t quite put Daniels on a straight and narrow path right away?

The re-release of the book gives current context to the story and offers up the stories of other playground legends, even referencing California legends Valenti looked up in the ESPN.com articles celebrating the Under Armour Elite 24 game played at Venice Beach published in 2010 by yours truly.

Reading the book for the first time in the 1990s, its powerful message was prevalent, but its impact hard to gauge. Now with the re-release, there is no questioning the book’s wide-ranging appeal and the benefits of today’s players reading it. The new forward details how Richard Williams, the father of Venus and Serena Williams, made the budding tennis stars from Compton read the book in their pre-teen years. There is also a new Epilogue that updates readers on Daniels and the other players mentioned throughout the 369 pages, along with the fact Valenti and Naclerio both had a long falling out with Swea’pea.

“Writing the epilogue now — as a man in his 50s — gave me a perspective on Lloyd and on the story that I couldn’t have had when I wrote the book at age 29-30,” Valenti said. “It made me more critical of what Lloyd did, wasting his talent, and also LESS critical, understanding the circumstances of life more.”

Daniels proved many wrong simply by surviving. He didn’t die young – and with the help of Tarkanian – miraculously made the NBA in 1992. He didn’t become a star, but after surviving chronic drug and alcohol abuse, years of malnutrition because of poverty, being shot and not having much high school or college experience, his 26-point, 8-rebound, 6-assist, 3-block, 3-steal performance in his second regular season NBA game for the San Antonio Spurs proved to be both astonishing and sad. Many who saw him play in ’85 or ’86 considered him a shell of that player during his five NBA seasons.

Though Daniels didn’t always produce at that level in the league, his second game was almost like him saying, “See, I told you guys.”

There have been plenty of documentaries made on key grassroots basketball figures in recent years, including “Bounce Back: The Story of Ronnie Fields”, “Lenny Cooke”, and “Manchild: The Schea Cotton Story”, among others. Of course, there also a documentary out there about Daniels. “The Legend of Swea’pea” actually helped Valenti, Naclerio, and Daniels mend old wounds. At its premiere at the 2015 NYC DOC Festival, Daniels chides Naclerio and Valenti, “I didn’t die, did I? I didn’t die.”

No, Swea’pea has not died, and neither has the book about his surreal life.

Note: “Swee’pea: The Story of Lloyd Daniels” is a look into the world of high school and grassroots basketball recruiting set against the backdrop of the crime-infested streets of New York City in the 1980s. The book also tells the tales of why some playground legends make it and why some fall through the concrete cracks and traps of inner cities across America. The book also profiles players such as Kenny Anderson, John Salley, Mark Jackson, Earl “The Goat” Manigault, Richie “The Animal” Adams, Tony “Red” Bruin, Orlando Antigua, and Ron “Terminator” Matthias. The book is set for re-release July 5 and can be pre-ordered on Amazon 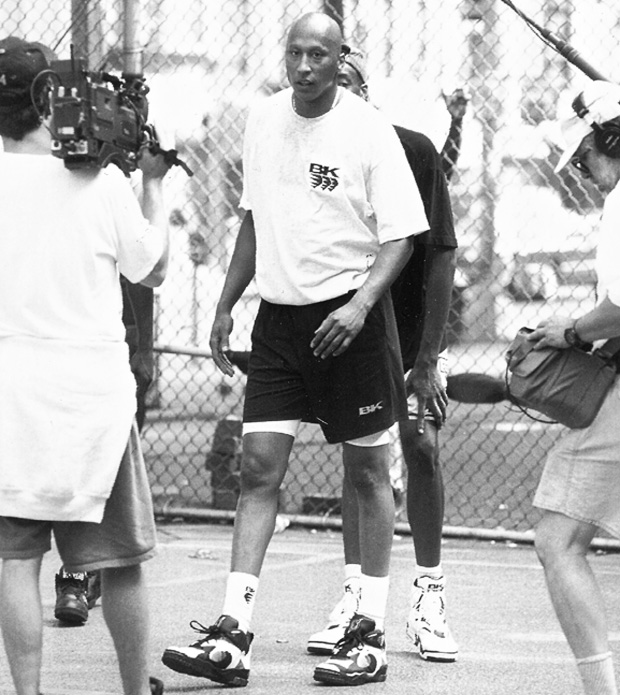 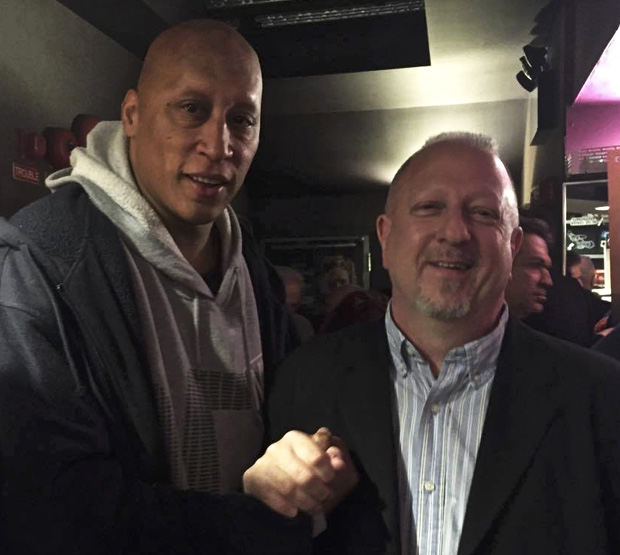