It’s the day everybody in LA has been waiting for. Why? Was it because NBA scoring leader Kobe Bryant made history and scored his 32,000th point? Hell no (yes for some)!

Was it because the Lakers beat the Hawks and pulled off their 2nd win of the season? Nope (yes for many)!

Was it because the swag was back for the Lakers and fans get to finally see highlights of Nick Young other than on TMZ? Hell yeah!

The man coach Byron Scott calls the “Energy Giver” made his return after missing the first 10 games with a torn ligament in his thumb and provided a much needed spark for the team many are calling the worst Laker team ever.

“It’s just like the swagger factor,” Young said after scoring 17 points in 28 minutes off the bench. “It just rubs off on everybody.”

Nobody was happier to get that rub than the milestone making Bryant who had somebody to blame and yell at during the game….

“He’s a great player” replied Kobe when asked about Nick being back. “He can create, he can shoot pull-ups, he can post, he can knock down the 3 and if felt good to have him out there. The defense really has to pay attention to him.”

He’s actually the top 3-point shooter ever (according to Nick Young).

The list looks good to me. As good as Iggy Azalea & J-Lo in that “booty” video…(i’m thinking about that video right now)…..maybe not.  Well, actually I agree with the list except for #1 and the 2nd part of #4 and I would have #3 in front of #2 and #5 at #1. Other than that, like I said, Nick Young’s list looks as good as his girlfriend standing next to Rita Ora in a Kill Bill tribute.

Lucky Swaggy! Good to see you back! 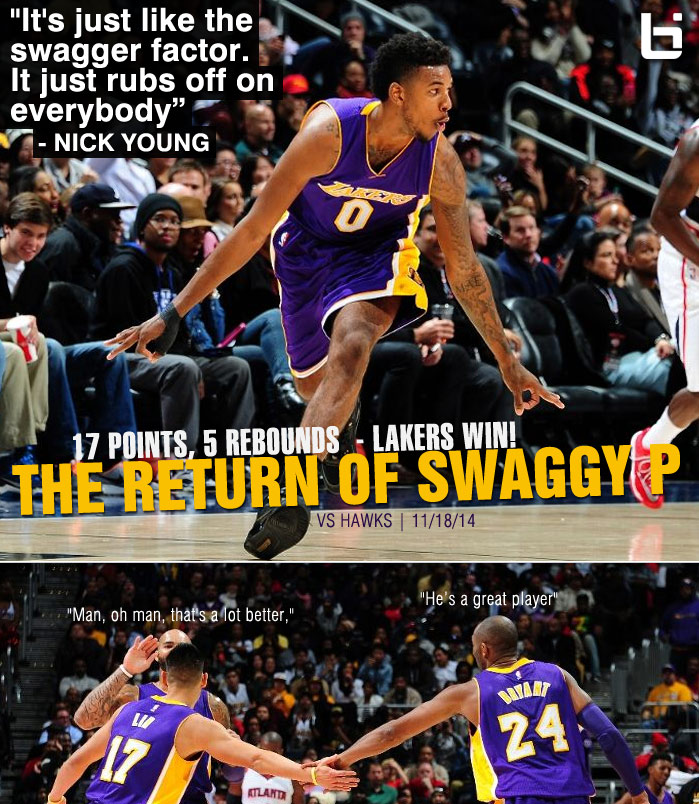