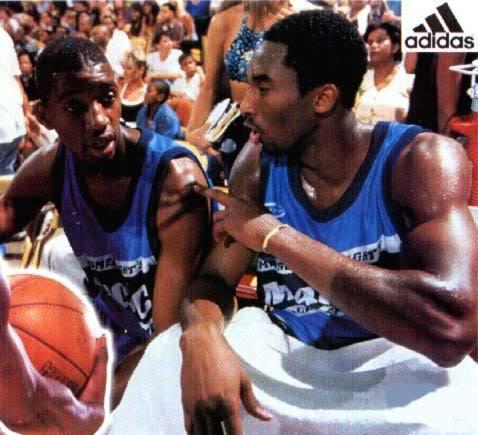 One of the biggest stories in sports yesterday was the 1-on-1 ESPN interview with Kobe Bryant, where he claimed to be the best 1-on-1 player ever and talked about specific battles with specific players, like Tracy McGrady.

When asked on Twitter to verify this story, T-Mac responded with a LOL and called out Kobe for lying.

@mheatfan631 LOL Hell no! That’s far from the truth. No one in the NBA is playing 1 on 1. Me and KB never went to Germany together either..

It doesn’t make sense for Kobe to make up such a detailed lie but it doesn’t make sense for T-Mac to point out that he’s never went to Germany with Kobe if that wasn’t true.  Now before you start calling Kobe a liar, take a look at this article that talks about the Adidas ABCD camps in Germany and who used to attend them: Kobe and T-Mac! It doesn’t say the two were in Germany together but between the picture above and the fact that this camp in Germany existed while Kobe and T-Mac were with Adidas, it does make it sound like Tmac could be suffering from selective memory.

The camp is part of the adidas global basketball camp network, which includes the adidas ABCD Camp in Teaneck, New Jersey. The ABCD Camp is run by basketball guru Sonny Vacarro and has been the “coming out” party for NBA stars such as Tracy McGrady, Kobe Bryant, Stephon Marbury and Jermaine O’Neal.

After Berlin, TMAC and his group went to the adidas Headquarters in southern Germany. TMAC and adidas CEO, Herbert Hainer, introduced the new T-MAC 3 (will hit retailers on November 1, 2003) to the crowd. “It is a great feeling to have your own shoe. Each year I have worked with the adidas design team to make the shoe even better. I can tell you that the T-MAC 3 is the best one yet,” added TMAC. Both the T-MAC 1 (launched in January 2002) and the T-MAC 2 (launched November, 2002) quickly became the number one selling sports shoe in the US.

I have a feeling this isn’t the last we are going to hear from the two about this story.