On this day in history, January 16th of 1993, Michael “Air” Jordan attempted 49 field goals (60 shots total if you count free throws) in a single game. To put that number in perspective, when Kobe Bryant scored 81 points, he attempted 46 field goals and 66 total shots if you include his 20 free throw attempts.

I’m not putting down MJ in any way for taking so many shots in this OT game, I’m just saying 49 field goals is a lot. Since 1985, there have only been five instances when a player attempted over 45. Of those five, three came from the hands of Kobe Bryant (including a game where he only made 17-of-47 shots) and the other guy beside Jordan on this shortlist is Chris Webber, who scored 51 with his 47 attempts.

So what did MJ accomplish with his 49 attempts? How about 64 points (did I mention he had a hurt wrist) — good enough for his second-highest point total ever and 10th all-time in the NBA since 1963. During that time, only David Thompson, Pete Maravich, and Wilt have scored more. But what makes Jordan’s effort in this game against a rookie Orlando Shaq so notable is that it came in a loss. Yep, Michael Jordan scored 64 points, grabbed 6 rebounds, made 1 assist (1 assist!) and stole the ball 5 times, only to have the Orlando Magic steal the game: 128-124. 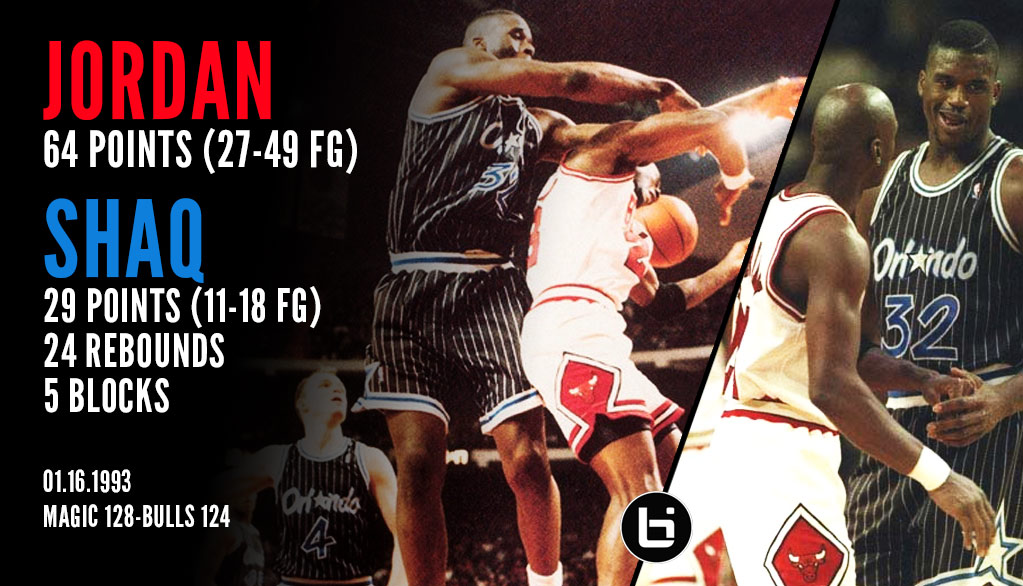 One person who would disagree with the “stealing” comment was Bull’s assistant coach Tex Winter. With 44 seconds left in regulation and the Bulls up by 6, Tex told the Zen Master they didn’t deserve this win. Then came a turnover by MJ, a rebound and dunk by Shaq — who had 29 points and 24 rebounds — missed free throws by Bill Cartwright and a wide-open three by Chicago native Nick Anderson, who was also the man Jordan was supposed to be covering.

OT would see much of the same from the final minute of regulation. Turnovers and missed free throws by the Bulls and Nick Anderson coming through in the clutch for a Magic team that found redemption after losing to the Bulls in Orlando four days earlier.

“We should be disappointed, we should be mad at ourselves for giving away this game, but not to the point where you start pointing fingers at teammates,” said Jordan as the majority of his teammates refused to comment. “We should evaluate what we did and make sure it doesn’t happen again.

The funny thing about the “doesn’t happen again” statement is the Magic have a history of beating MJ and the Bulls when Mike has a great game. This was the third time Jordan scored 45+ against Orlando and the Bulls lost all three of those, including the infamous stolen jersey game.

As mentioned, Jordan did finish with his second-highest point total and most field goals ever but when asked about his personal accomplishments in the game, MJ didn’t even want to acknowledge it.

“The points don’t make a difference to me,” Jordan said. “It’s just wasted energy in a sense because we didn’t finish the game the way we should have. ‘We just gave away the game. ‘We played good enough, but we just made some dumb plays. When you blow a six-point lead in less than a minute, there is something wrong with that. Getting 64 points doesn’t mean anything when you lose.”