The first college team I ever liked were the UNLV Runnin Rebels.  20+ years later, I still consider that team to be the most exciting college team ever –  Yes more than the Fab 5.  I thought Larry Johnson was going to be the future best player in the league (call me crazy but Jerry West said the same thing).  The plastic man Augmon was going to be an ESPN regular.  Greg Anthony & Anderson Hunt were going to be solid pros.  Despite solid careers for most of them, they all fell short of the careers I thought they were going to have.

Here’s a special feature on that team with Coach Tark and the starters of that team followed by a great article on the 90 Rebels.

Great article on the team: Source

Twenty years ago, the UNLV Runnin’ Rebels manhandled the Duke Blue Devils 103-73, in the most lopsided National Championship game in history. The game was viewed by many as a ”Good vs. Evil” match up.Looking back on it, the game was just that – but not in the way that you all would think. 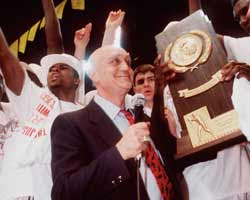 Lines in the Sand

The battles between Jerry Tarkanian and the NCAA are legendary, spanning back to the late 1970′s when “Tark the Shark” as he is affectionately known was coach at Long Beach State. The accusations of recruitment violations at Long Beach State continued and intensified as he took the job at UNLV in 1977. The NCAA had it’s eye on the Vegas program long before Tark entered the picture (1971) and forced Vegas to suspend Tark  for two seasons. The NCAA lost that battled because it violated Tarkanian’s right to due process. This case would make it all the way to the U.S. Supreme Court, the NCAA’s case against Tark were based solely on hearsay and failed to shared few of it’s finding’s with the school or Tarkanian. Hearsay is non-admissable. In 1998, the NCAA settled with Tarkanian for $2.5 million on charges filed by Tarkanian that he was harassed by the NCAA for more than two decades – despite denying these claims the NCAA paid the settlement.

Part Texas Western, part Georgetown is how I’ve viewed teams coached under Tarkanian. While at Long Beach State (1968-1973) he was one of the first coaches to have three Black players in his starting lineup (breaking an unwritten rule at the time). Many of Tark’s recruits are from the inner city, some players may have had issues that scared off some of the glamor schools – be that as it may, Tark saw the beauty in this opportunity. Wherever Tark went his teams were perceived as thugs, illiterate and loose cannons. One team in particular was his 1990 National Champion Runnin’ Rebels  – 80 percent of this team has a degree from UNLV. So much for thuggery.

In a town with as much glitz and glamor as Las Vegas was there any other way to play? In the 1976-77 season the Rebels (29-3 – Tarkanian later named the team the “Runnin’ Rebels” for their up-tempo style) would break the record for points in a season (3,426) 100-point games (23) and consecutive 100-point games (12) this team would go on to lose in the Final Four to eventual champion North Carolina. This team featured among others Reggie Theus.

Ten years later, the ’86-’87 Runnin Rebels would return to the Final Four, this team featured sniper Freddie Banks, Mark Wade, Gerald Paddio, Jarvis Basnight and All-American Armon Gilliam. The Rebels would lose to Indiana in a classic National Semifinal, ending their season at 37-2. This team pulled me in to the fold. The UNLV pregame intros are as entertaining as any show on The Strip, and you may even catch Wayne Newton sitting court side.

Runnin’ through a minefield

The ’88-’89 season would see the Runnin’ Rebels fall one game short of the Final Four after losing to National Runner-up Seton Hall. But it did not come without it’s dramatics. Tark was matched up with Lute Olsen and the Arizona Wildcats led by perennial All-American Sean Elliot. Olsen ran a “clean” program by NCAA standards and he played that to the hilt when it came to recruiting and his views of UNLV and Tarkanian. In the Sweet 16 matchup the Rebels seemed to be over matched by the Wildcats who besides Elliot had Jud Buechler and Kenny Lofton (yes, that Kenny Lofton). Late in the contest freshman shooting guard Anderson Hunt knocked down to end the Wildcats season and Elliot’s collegiate career.

The summer of ’89 would bring Tarkanian and the Runnin’ Rebels Larry Johnson from Odessa Junior College. It has long been Tark’s custom to pull players from the JUCO ranks. Snagging Johnson would bring Tark and the Rebels their greatest victory.

But not without one final push from the NCAA.

During the 1990 season the NCAA visited UNLV 11 times and suspended 10 different players at some point during the season. Three of the Rebels five losses came against Kansas, Oklahoma and LSU – all with players of note serving some sort of suspension.

If that wasn’t enough junior point guard Greg Anthony broke his jaw in a game against Fresno State. Although he was  slated to miss the next several games, Anthony returned to practice wearing a hockey helmet and was able to play out the season.

Rebels With a Cause

UNLV entered the 1990 NCAA Tournament as the #1 seed in the West and went through the first two rounds with relative ease. But in order to get to Denver (site of the Final Four that season) the Rebels would have to go through a Loyola Marymount team that was fully inspired by the death of their leader Hank Gathers. The Rebels would go on to defeat the Lions by 30 points to once again reach the Final Four. Vegas would face Georgia Tech in the second National Semifinal game. The Yellow Jackets (I like the Ramblin’ Wreck nickname personally) had “Lethal Weapon 3″ a trio of guards led by super frosh Kenny Anderson accompanied by Brian Oliver and Dennis Scott. The Rebels trailed by 7 points at the half before junior forward Stacey Augmon took over the game at both ends of the floor to seal a win for the Rebels and a date with the Duke Blue Devils that Monday night.

For as much as Duke University is hated today, twenty years ago they were a sympathetic figure. In coach Mike Krzyzewski, here was a young coach who had great players but could never win the big one. His players were seen as scholar athletes from close knit families that lived in middle class America. In the eyes of the NCAA, Duke University was the most pristine of it’s programs. It was their hope that Duke deny Tark and the Rebels another National Championship – while ridding the college basketball world of the evil they represented in the process. In a pre-game press conference when asked about the perceived contrasts between his players and Duke’s, Tarkanian shot back, “ That really upsets me, because I’ve met some of the Duke kids. I don’t think they’re bad kids at all.”

Once the ball went up, it was all Vegas, Duke did not have an answer for the Rebels at either end of the floor. Anderson Hunt killed Duke from the outside for 29 points on his way to winning the Final Four MVP. Larry Johnson was a man amongst boys in the paint and Stacey Augmon was his disruptive self on the defensive end. If there was ever an avalanche in the Mile High City it occurred on that night. The Runnin’ Rebels would embarrass the Blue Devils 103-73 and give Jerry Tarkanian his first and only National Championship.

No one likes the bad guy, but you have to respect a rebel.

Black sneakers, baggy shorts, custom uniforms by Nike, team huddles on the floor – these were things never seen in college basketball prior to the 1990 UNLV Runnin’ Rebels. UNLV would inspire many of the great teams to follow them in college basketball in terms of style of play as well as their impact in pop culture. Most notably the Michigan Fab Five and the Florida Gators Back to Back National Championship teams.

Twenty years after the NCAA tried to incriminate the UNLV program –  its fingerprints are visible on every basketball program in America.