With Kyrie Irving sitting out game 2 vs the Hawks, LeBron played point and played it pretty well. So well, he earned some high praise from the best point guard ever as James racked up 30 points, 11 assists and 9 rebounds in a 94-82 win.

Although the near triple double isn’t that mind-blowing on paper, if you watched the game you would understand why Magic and the whole internet was gushing about James’ performance and ability to make a joke out of the Hawks defensive strategy on him.

“You really can’t make me do what I don’t want to do,” James said. “I play the right way.”

A statement Magic Johnson would agree with.

“LeBron James had one of the best playoff games I’ve seen him play and he made it look easy!” said Johnson.

“LeBron James played PG and he got everybody involved tonight. His basketball IQ is off the charts!”

LeBron also moved ahead of former Laker Jerry West and is just 1 game away from Magic’s former teammate Kareem in the “Most 30-pt games in playoffs history” list.  Not bad for a “point guard.”

“How much does it help to have LeBron on your team?” Cleveland coach David Blatt said, repeating a question. “Do I really have to answer that?” 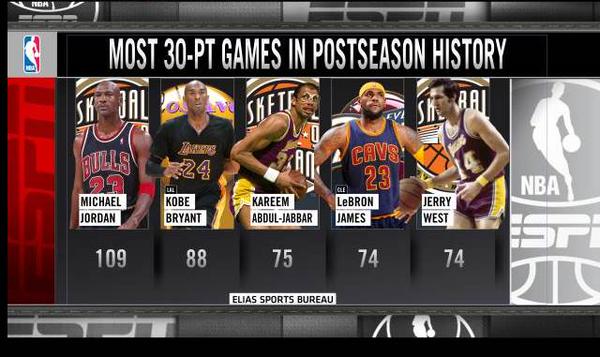