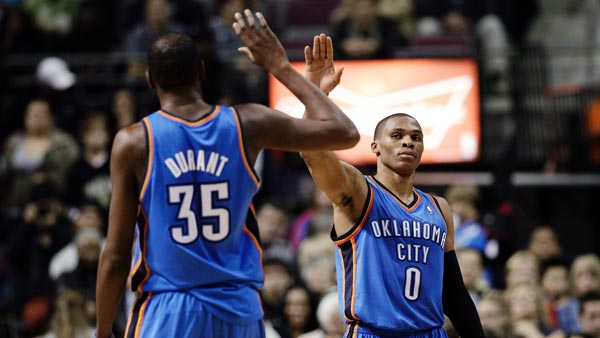 27. The age when young men in the NBA solidify themselves as legends. Cementing legacies with their respective teams at the ripe age of twenty seven. Many players in the league has made a name for themselves while at the age of 27. Isiah Thomas was 27 in ’89 when he won his first championship. MJ was 27 when he took down Magic & the Lakers in the ’91 Finals. Same thing goes for LeBron in 2012 with Miami. And guess what, Steph Curry was 27 when he brought home the first championship for the GS Warriors. So there’s something to be said about the age of 27.

So this year, guess who’s BOTH 27? Russ & KD. Yep, they both play for the same team, born months apart, & are currently duking it out with GSW in the Western Conference Finals. The OKC Thunder reached the Finals back in 2012 but they were only 23 at the time. Not much under their belt but they sure as hell were talented enough to take their team to the Finals. Championships are dreamt for players at such a young age. Although Kobe got his first title at 21, but even he had a partner in crime to help him get those rings. And that’s right, Shaq recently celebrated his 28th when he won his first ring with the Lakers with a young Mamba by his side.

So with all that being said is this the year for KD & Russ to finally get their second chance at NBA Royalty? Even if it isn’t their year, this duo will definitely be making some serious noise if they were to stay together. They’re both entering their elite primal stages in their career & they’re both hungry AF for a title.