On this day in history, January 22nd of 2006, in his 666th game, Kobe Bryant had his “Salvador Dali” masterpiece. A masterpiece so difficult to create, it’s even difficult to do in video games.

“Not even in my dreams,” Bryant said after scoring a career-high 81 (66% of his team’s total points) against the Toronto Raptors. “That was something that just happened. It’s tough to explain. It’s just one of those things. It really hasn’t, like, set in for me. It’s about the `W,’ that’s why I turned it on. It turned into something special. To sit here and say I grasp what happened, that would be lying.”

Speaking as a Laker fan and someone who had Kobe Bryant on their fantasy team that night, it was hard for me to even grasp what Kobe did. I still have a hard time grasping what Kobe did and I watched Kobe beat Lester Earl in a high school dunk contest; I watched a young Kobe go from cameos on the TV show Hang Time to winning an Oscar (thanks to John Williams and Glen Keane); I watched Kobe drop 50 on All-Stars while wearing Adidas moon boots; I watched Kobe go from Robin to Batman to Superman and outscore an opposing team over three quarters; I watched Kobe escape a sexual assault case that I was sure was going to end his career (he’s lucky social media wasn’t around); I watched a 37-year-old Kobe score 60 points in his final game (I even got to fly to the game in his helicopter).

By 2006, I thought I saw everything there was to see out of Kobe. And then he put up more points in one night than my next top three scorers on my fantasy team scored that night…and my other players weren’t scrubs. When I say “scrubs,” I mean the rest of the starters on Kobe’s team that night. Kobe would agree.

In 2014, Kobe caused a little controversy with this quote about that season’s team of “scrubs,” which included Smush Parker, who Kobe once called his worst teammate ever.

“’I almost won an MVP with Smush Parker and Kwame Brown on my team. I was shooting 45 times a game. What was I supposed to do? Pass it to Chris Mihm or Kwame Brown.”

He actually took 46 (of the teams 88) on this night and as mentioned, had no plans of passing the ball (for good reason) and that’s why he ended up with two assists. The one other starter not mentioned in Kobe’s statement was a pre-Kardashian Lamar Odom, who finished with only eight points or you could say a 10th of Kobe’s scoring output that night.

“That was something to behold,” Coach Phil Jackson said. “It was another level. I’ve seen some remarkable games, but I’ve never seen one like that before.”

And the only thing better than rewatching highlights of this game is watching the late, great Stuart Scott recap it.

HOW MANY POINTS WERE SCORED ON JALEN

No one hates the anniversary of this game more than Jalen Rose. The narrative is Kobe scored all 81 against him when it was actually “only” 18, which was just one more than Mo Peterson.

I actually think Kobe was looking for some payback against Mo Pete, who “held” Kobe to just 11 points on 5-of-12 shooting a month earlier. 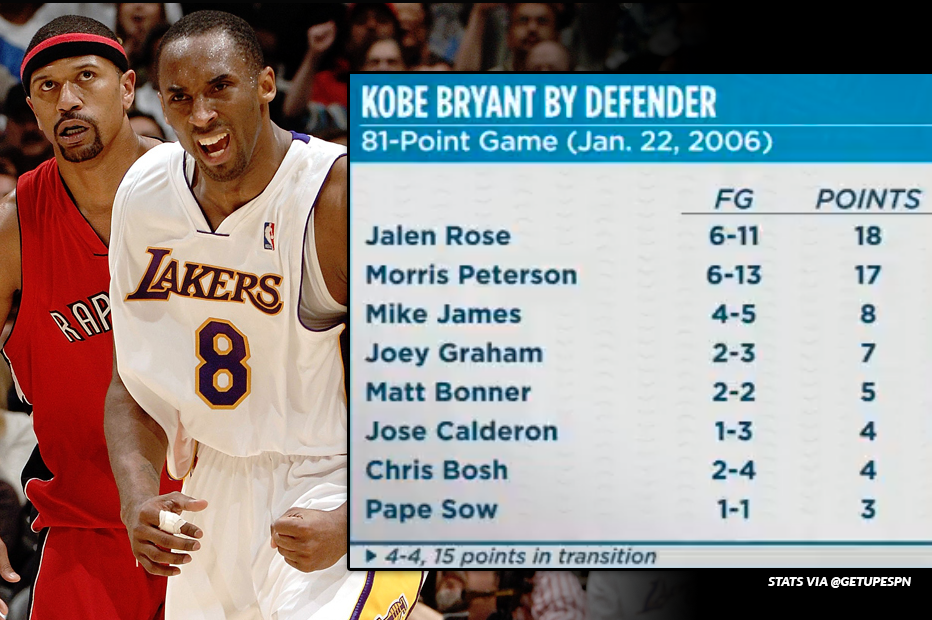 And this whole time, we thought @kobebryant scored all 81 points on @JalenRose. pic.twitter.com/caYtCuqa7G