The USA team was just 8 points away from doubling the scoring output by China during Sunday’s 106-57 butt whooping exhibition. 6 players on the USA team scored in double-figures and 8 shot at least 60%. Kevin Durant led the way with a game-high 19 points in 18 minutes while Warrior teammate Klay Thompson scored 17 and matched KD in the 3s department with 4.

Here’s the 10 best highlights/moments of the very amusing blowout.

KD & DRAYMOND GET BOOED IN LA 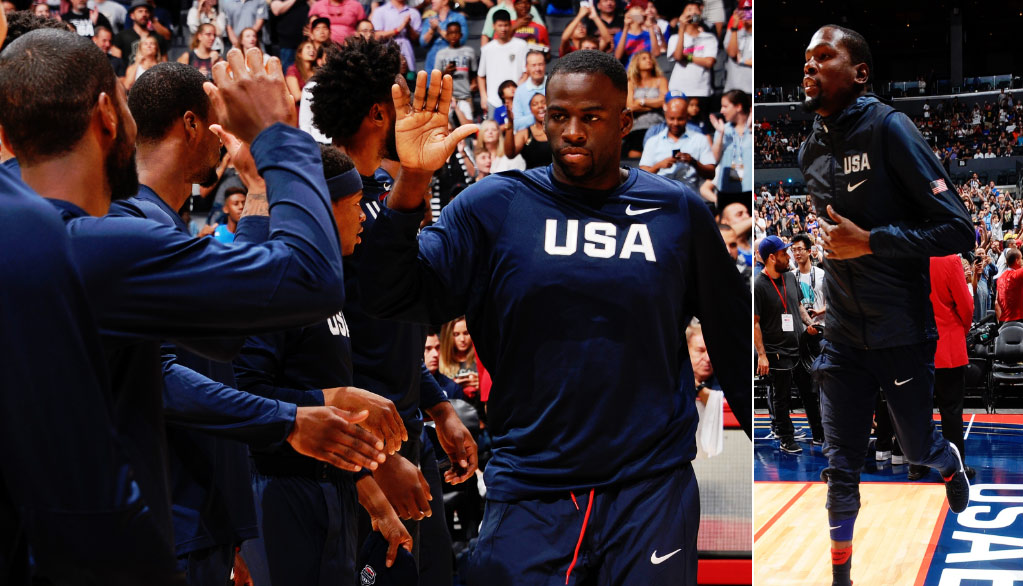 Hopefully KD’s ears clear up before their next exhibition game, which will take place at Oracle.

DEANDRE AIRBALLS A FREE THROW TO THE DELIGHT OF HIS TEAMMATES

DeAndre did do it all (12pts, 5rebs, 3blks, 2asts, 2stls) but he couldn’t make a free throw. His one attempt was an airball, which cracked up his teammates on the bench.

DEMAR DEROZAN UP AND UNDER MOVE

It was pretty clear DeRozan had no intentions of passing on this play, which ended with a pretty up-and-under move.

KYRIE IRVING SPLITS THE D AND HITS THE BUZZER BEATER

Irving ends the 2nd quarter with a layup at the buzzer after splitting 2 defenders.

Déjà vu? Klay starts the 2nd quarter off with back-to-back 3s in almost the exact same spot. He would only make 2 of his other 6 attempts from downtown.

The dunk of the night didn’t come from DeAndre Jordan. It actually came from Harrison Barnes off a nice pass from DJ.

BOOGIE COUSINS WITH THE HAKEEM SPIN

JORDAN WITH THE GOALTEND?

When you are losing by 49 points, you aren’t going to get any calls. This was Jordan’s 3rd block of the game.

JORDAN WITH THE INBOUND ALLEY-OOP

It wasn’t as nice as Vince Carter inbound oops at UNC but this inbounds play from Lowry to Jordan was nice.

Although this play came from China, Melo getting crossed and then scored on by Guo Ailun deserves a place on this list.