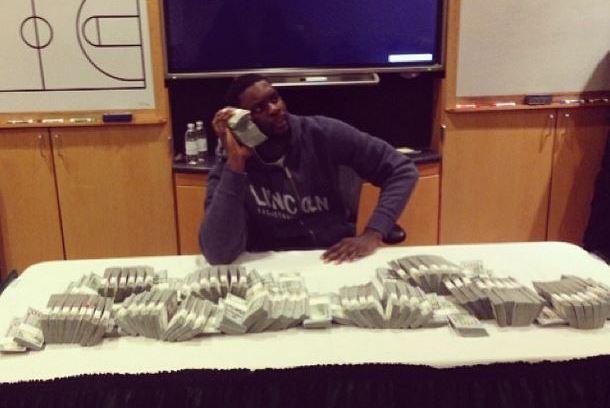 Lance Stephenson’s nickname is Born Ready. He got the name from the great Bobbito Garcia back in 2006, when Lance was a high schooler killing adults at the Rucker (he put up 27 points against Jamal Crawford and Nate Robinson at an EBC championship game). Witnesses to those Rucker Park games knew the Brooklyn kid was born to be in the NBA. Witnesses to the 2014 playoff series between the Miami Heat and the Indiana Pacers and the current series between Cleveland Cavs and the Pacers know Lance Stephenson was born to be LeBron’s arch-nemesis; If the NBA was the DC universe, LeBron would be the Dark Knight and Lance would be the Joker, the Clown Prince of Crime.

On Sunday, the Clown Prince of Crime was in top form: flopping, baiting the King into a tech, flopping, getting called for travelling on an inbound, flopping and getting into a wrestling match with Jeff (finally has a reason to be on the floor) Green.

“I love Lance.” Said coach Tyronn Lue after the Cavs’ win in Game 4. “He’s a throwback player. He reminds me back when I played when I first got in the league. Guys were physical. He’s going to hit you, no easy layups. You love that physicality he brings…But I like his style. He comes in, he plays hard and tough. He’s not going to back down from anyone and that’s what you need on your team. He reminds me of an old-school player so I like him.”

Here’s the best of Lance and his “physicality” from Sunday.

JUMP BALL: After a jump ball is called, Lance takes the ball away from LeBron and proudly holds it up in the air like he’s Rafiki holding up baby Simba. LeBron wins the tip.

GET OFF ME PT 1 & 2: There’s two great moments in this montage clip. The first is Lance’s surprised reaction to LeBron pushing his hands off of him. The second (17 second mark) is Lance running into the back of Nance, bouncing off of him and landing on the ground.

ALL BALL: Lance steals the ball from LeBron, takes on two Cavs and scores. LeBron was left at near half court holding his hand in pain.

THE TRAVEL: Up by one in the 4th, Lance earned a spot on the next episode of Shaqtin’ a Fool with these extra steps on an inbound play.

THE SHOVE: LeBron gets frustrated with Lance (again), gives him a light push, Lance flies to half court and the ref hits LeBron with a tech. Here’s what LeBron had to say about the play after the game.

“I should know better. I’ve been dealing with this since elementary. I tell you a joke and then you laugh and get caught. That’s what happened. Lance told me a joke, I laughed, teacher caught me and now I have to go see the principal.”

WRESTLING WITH JEFF: Lance comes in with 14 seconds left in regulation. Oladipo hits a three to make it a three-point game with 11 seconds left on the clock. Lance tackles Jeff Green on the inbound and wrestles with him on the floor, hoping for another jump ball. A foul (not a flagrant one) is called on Lance. Green hits one of the two free throws for the game’s final scored point.

“He’s not going to fight,” Said Green to ESPN. “I’m not going to fight. It’s not worth it. I mean, if we wanted to fight, there’s a big-ass parking lot out there and we can fight. But at the end of the day, my job is to keep my composure, go to the free throw line, knock one down and then move on. It’s not worth it to give that extra energy to him.”

LANCE’S SIDE OF THE STORY