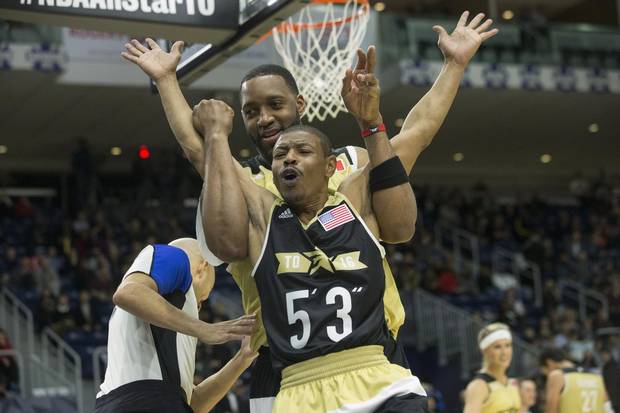 A few days ago I posted a video of 36 year old Tracy McGrady showing off his signature behind-the-back turnaround jumper while playing pick-up basketball and I said “T-Mac has still got it.”

On Friday night, T-Mac scored a team-high 18 points for the winning Canada team in the NBA Celebrity game but showed he has a little rust on him and doesn’t still “got it” in the hops department. Early on in the first quarter, T-Mac tried to recreate his famous off-the-backboard dunk from the 2002 NBA All-Star game and ended up doing a finger roll.

Then in the 2nd quarter, the 6’8 former All-Star had the opportunity to post up against 5’3 51 year old Muggsy Bogues and maybe pull off his signature turnaround jumper…

Also in the 2nd quarter, T-Mac got an earful from 5’4 Kevin Hart after shooting a wide-open airball.

All jokes aside, it was great to see T-Mac back at All-Star weekend; It’s been 9 years since his last appearance and hopefully this fun game will convince him to become a part of the weekend festivities every year from this point on.

The NBA just has to make sure the future games are in a warmer city.