While MVP candidate Kawhi Leonard sat out the final seconds of regulation and entire OT and MVP candidate James Harden had one of the worst five-minute stretches of his career during OT, 39-year old Manu GINOBILIIIIIII (Barkley voice) came through in the clutch to save the Spurs in Game 5 with a heroic vintage performance.

“Manu, you know, reached back and gave us one of his Manu performances from past years,” said Spurs coach Gregg Popovich about Ginobili, who had 12 points, 7 boards, 5 assists and the dunk and block of the night in 32 minutes. “He was a stud. We actually went to him with Kawhi off the court. We went to him to generate some offense, and make some things happen. He did a good job, whether it was distributing or scoring. He was big for us.”

Good job and big are understatements. It’s like saying this dunk in the second quarter was surprising.

“I don’t know if you saw that wrong-foot, right-handed dunk, but that’s one for the record books right there,” said teammate Danny Green. “From that moment on, I knew he was locked in. I knew he was going to give us some good energy.”

He also gave his teammates some good passes, like this one to Green for a lead-taking-buzzer-beating three at the end of the third quarter.

Then in the opening seconds of the fourth quarter, Ginobili knocks down a three of his own over the hands of Eric Gordon (1:05 mark of the top video). 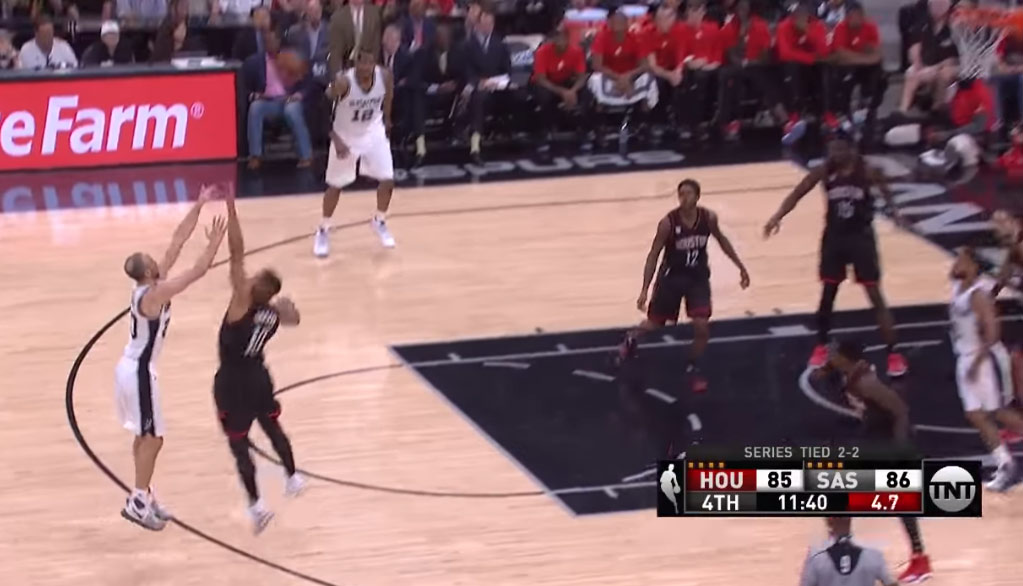 Down by two with 37 seconds left in regulation, Ginboli took Clint Capela one-on-one and showed him his trademark scoop layup he’s been doing in the NBA since Capela was five-years old (1:08 mark of the following video).

In OT, Manu had two big assists to Danny Green — one for a three and the other for an and one layup — but his best play of the game and one of the best plays of his career came in the final three seconds as he swatted a potential game-tying three by James Harden from behind.

“I know where his shot release is from, and he went by me, so I tried to bother him as much as I could and I saw that I found myself very close to the ball, so I went for it,” he told reporters. “Very risky, it was a risky play, but it was also risky to let him shoot, so I took my chances.”

And his chance-taking not only saved the game, it saved the series for the Spurs. The block was also his fourth career block on a game-tying/go-ahead shot in the final minute of the game; the other three names were Kevin Love, Ray Allen and Kobe Bryant.