Check out Dunkademics’ new mixtape featuring one of the most underrated dunkers ever: Tracy McGrady!

Yep! Everybody knows T-Mac had hops and remembers his epic dunk on Shawn Bradley in the 2005 playoffs, but how many people remember all of the poster dunks he made during his Toronto days? Unless you had access to Raptors game during his few (underrated) seasons there, you probably never even saw most of his dunks because ESPN, CNN, TNT, NBC, etc, etc could only show so many clips in a game recap and Vince Carter would fill up the entire recap.

If you subscribed to Slam Magazine in the 90s (back when the mag was three times thicker and wasn’t just dominated with ads by three shoe companies) then you at least got to hear about his nasty dunk on Kornel David in the always awesome Slam A Do Month. 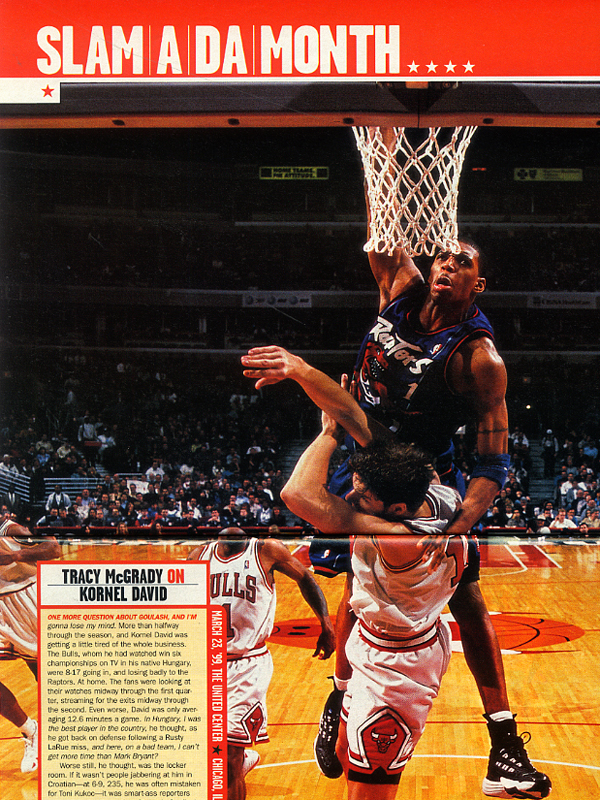 Then came the NBA dunk contest, where he and Steve Francis had two of the most impressive showings in contest history. Again, McGrady was overshadowed by cousin Carter, who spent weeks convincing a reluctant McGrady to show up, knowing he was going to finish in second place.

Thankfully for YouTube, mixmakers like Dunkademcis and MaxaMillion711 and my VHS collection (yes, I’m Vincent Da), we have proof that Tracy McGrady is one of the nastiest dunkers ever and was an unappreciated highlight reel during the Vinsanity era.