Blazer greats @jkersey25 and @tpltgolf hugged it out today as they talked Black History Month at Madison High. pic.twitter.com/8PZpxQgJIN

Jerome “Mercy” Kersey, a Portland Trailblazer legend and NBA good guy, passed away at the age of 52 on Wednesday – just 1 day after the above photo was taken of a cheerful looking Jerome celebrating Black History Month at a high school.

There’s a lot of things worth praising Jerome for but here’s the two things that I will always remember him for.

Kersey was part of the famous 1984 NBA Draft and is often mentioned now when people discuss the talent that came from the draft: MJ, Hakeem, Barkley, Stockton, Perkins, Thorpe, Cage.  But what most people don’t know is that Kersey wasn’t a first round pick – actually he was just 2 picks away from being a 3rd round pick.  Now imagine drafting a player who would go on to play 17 seasons and could get you 18 and 8 in the 2nd round.

During Kersey’s best statistical season in 87/88 he was putting up 20 and 10 on a regular and had monster games such as a 34 point/20 rebound performance against the Nuggets and a 32 point/14 rebound game against the Lakers – a team he would eventually win a championship with.

The other thing that I always praise Kersey for was his willingness to continue to participate in the NBA dunk contest despite losing every year.  How many times? How about 4 times!  And he wasn’t just showing up to the dunk contest just so he could be a part of All-Star weekend either. In 86, he almost went to the semi-finals but lost in a tie-breaker to Stansbury (this is also back when the NBA allowed previous winners to have a first round bye so Nique didn’t have to dunk in the opening round). The next year, Kersey beat out Clyde Drexler, Ron Harper, Gerald Wilkins and Terence Stansbury and finished 2nd to MJ.  In his 3rd try he was eliminated in the first round but still came back for a 4th time.

You got to love a guy like this and from all of the love he got last night on Twitter, it’s obvious i’m not alone in thinking so highly of Kersey. RIP Legend.

“It is so sad,” said former teammate Clyde Drexle. “It is a huge loss for the Portland community. He was the greatest guy, the nicest friend, teammate and brother. He was loved by everyone. We will all miss him. He just cared so much. This is unbelievable.”

The following is a press release about Jerome by the Blazers.

PORTLAND, Ore. (February 18, 2015) – A beloved figure and one of the most prolific Portland Trail Blazers, Jerome Kersey, has passed away at age 52. Cause of death has not been confirmed. A long-time resident of Portland after his 17-year NBA career, Kersey was employed by the Trail Blazers as Director of Alumni Relations as part of the team’s Social Responsibility Department.

“Today we lost an incredible person and one of the most beloved players to ever wear a Trail Blazers uniform,” said Trail Blazers Owner Paul Allen. “My thoughts and condolences are with the Kersey family. He will be missed by all of us. It’s a terrible loss.”

“We’re shocked to lose such a great member of our Trail Blazers family,” said Trail Blazers President and CEO Chris McGowan. “The news is so sudden, and we’re sure more details will be forthcoming. But it is indeed a sad day for our organization, the city of Portland and the NBA. Jerome will be remembered not only for his incredible contributions on the court, but his tremendous impact in our community.”

“Jerome was an incredible influence on our players as a model for life after basketball,” said Trail Blazers President of Basketball Operations Neil Olshey. “He set the bar extremely high with his long-lasting influence in this community.”

Kersey was part of the great early 90s Portland nucleus that led the Trail Blazers to the NBA Finals in 1990 and 1992. He ranks fifth on the team’s all-time scoring list (10,067) and third in rebounds (5,078) after an 11-year tenure in Portland from 1984-95. He continued his career with Golden State, L.A. Lakers, Seattle, San Antonio and Milwaukee, and he won an NBA Championship with the Spurs in 1999.

Information about a celebration of life for Kersey and other arrangements is still forthcoming from the Kersey family and the Trail Blazers. 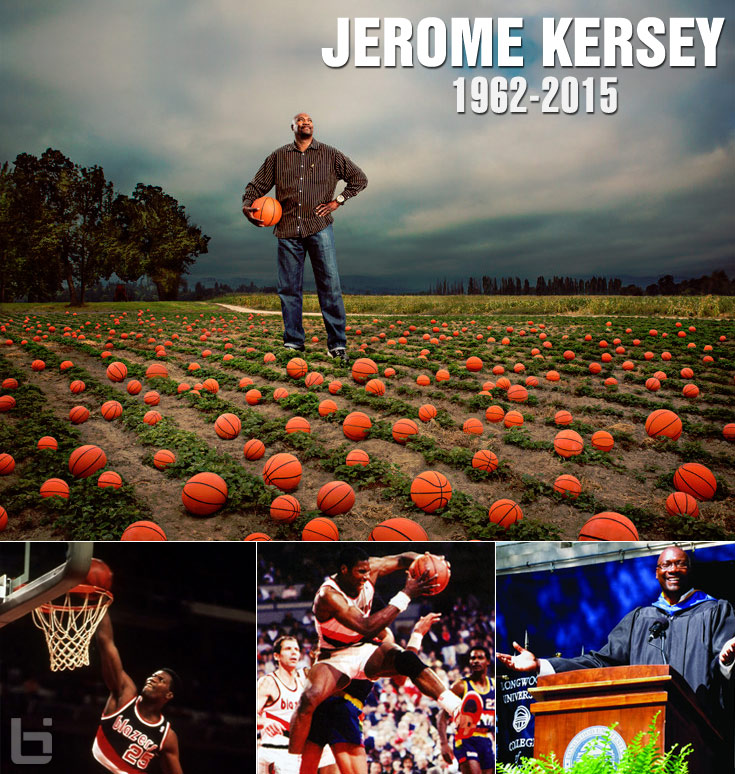