While the summer grassroots season winds down and fatigue sets in, the elite players whom take care of themselves best — and their teammates — are the ones that shine. That has been the case with point guard Lonzo Ball and his U.S. Team Rose club at adidas Nations. Check out this exclusive BIL interview as Ball talks about his team’s unselfish play.

The Next Level Sports Complex in Garden Grove, Calif. has a humid feel and a gym full of elite high school and college players trying to separate from the pack in front of a throng of NBA brass and national basketball scouts.

The adidas Nations event brings together some of the best high school-aged players from all over the world. It’s a fantastic concept and has produced fantastic evaluations in recent years, but it does present its share of challenges.

It’s early August and a vast majority of the players are fatigued from a long summer playing at various camps and with their travel team. There is also the element of getting acclimated with other elite players and sharing the ball with other players with similar ability who happen to play the same position.

One team with considerable backcourt talent that has quickly made the adjustment  is U.S. Team Rose, made of of many of the United States’ best 2016 (seniors-to-be) prospects. The adjustment is reflected in their on-court performance and overall performance at the event. 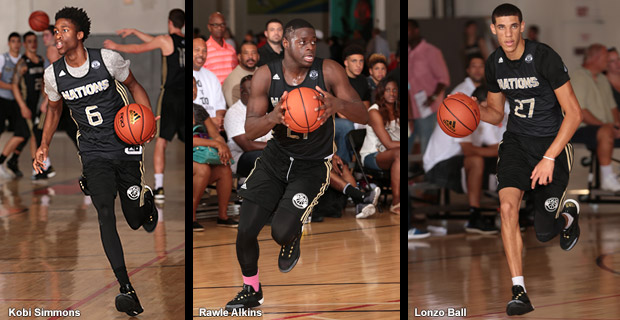 Team Rose is off to an impressive 4-0 start with the closest margin of victory a nine point win (97-88) over Team Asia Pacific. The minutes have varied for the guards, but through trial and error — and basketball intuition — they have figured out the combination that has made the team run at its highest efficiency.

Alkins has quickly figured out if he runs the floor he’ll be rewarded regardless of whom has the ball up front. He simply is too powerful for almost any high school-aged player to slow down in the open court. In the half court, he is explosive enough to get by his man and finish. Alkins has scored 15, 20 and 20 points with only one game in which he shot under 50 percent from the field.

Simmons and Jackson have both played the point guard spot with varying degrees of success. Jackson is an able passer, but he has a scorer’s mentality and sometimes operates with a singular vision to score. Jackson is a good point guard, but has a chance to be a college standout at the two-guard slot. Simmons has been inconsistent — at times finishing with explosive moves, while at other times careless with the ball and not seeing the passing lanes necessary to play the position at a high level.

Ball has eased his way into making things click for this team from the point guard position. The sign of a true lead guard is when teammates understand they are in the best possible position to excel when a particular player has the ball in his hands and in this case that’s Ball. The Chino Hills standout doesn’t do this vocally, but by making his teammates realize they’ll get the ball back if he’s the one facilitating offense. Ball is not the most explosive in the open court and his shot selection lacks at times (it is much better here at adidas Nations than it was in Las Vegas a week ago when he played with his normal travel team), but his innate ability to see passing lanes or a developing play and making the correct decision with confidence has put Team Rose in position to play for the adidas Nations team championship on Monday night.

Ball came in with a mixed bag of reviews with regards to his status near the top of credible national player rankings, but his play here so far has left no doubt the UCLA commit is on the level of a top 15 national prospect. In this exclusive BIL interview (SEE VIDEO ABOVE), Ball speaks on his adidas Nations experience and how Team Rose’s backcourt quickly learned to jell on the court.

Team Rose took on a talented African team that came in with only one loss and used a big fourth quarter to pull away in a 105-89 win. With the victory, Team Rose will take on Team Wall (also made up of top U.S. 2016 prospects) in the adidas Nations title game at 9 PM ET (ESPNU). In the third place game, it will be Team Lillard (a U.S. 2017 team) vs. Team Africa (the club Team Rose defeated on Sunday evening) at 7 PM ET (ESPNU).

The Rose vs. Africa game was within a couple of possessions halfway through the fourth quarter. That’s when Alkins, Team Rose’s most consistent scorer, and Ball took over. Alkins hit a couple of pull up jumpers in traffic when Africa threatened and after a sluggish three quarters, Ball took over down the stretch with two free throws, a big blocked shot, a 3-pointer and an acrobatic reverse lay-in.

Alkins finished with 28 points, eight rebounds and six assists and has arguably been the most impressive performer in the event. Through four games he is averaging 20.8 ppg, 6.3 rpg and 6.3 apg. After a 2-for-11 start from the field, Ball finished 4-of-14 with 10 points, 11 rebounds, seven assists, four steals and three blocked shots. He’s averaging 10.8 ppg, 8.0 rpg, and 4.0 apg. 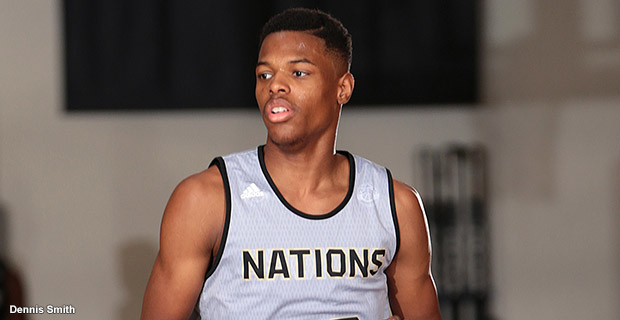 A damper was put on Team Wall’s title game appearance when 2016 point guard Dennis Smith, a 6-foot-3 point guard from Trinity Christian (Fayetteville, N.C.) and the team’s top performer, went down with a knee injury in Sunday night’s win over Team Lillard. Smith went to change direction and after he was bumped slightly, he fell to the floor in pain immediately after his left leg hit the ground following his drive to the basket.

Smith attempted to get back up on his own power, but eventually had to be helped to the trainer’s table. He iced his left knee and then left the gym on crutches. There was no further update on his injury status as of late Sunday night. He obviously won’t play in Monday’s title game and likely won’t be playing in any competitive game anytime soon.