One of the most controversial stories exactly a year ago was Drake’s verse on the song ‘”Stay Scheming,” Specifically the line

That line was retweeted millions of times, spawned a bunch of flea market shirts and became one of the most popular sayings of 2012.  So popular that people even joked with Kobe about it in public.

Kobe and Vanessa eventually got back together and Drake commented/apologized for the lyrics.

“That line came from a conversation about being this young and making this much money and the fear of losing it all. I just used his potential situation to address my own life. I never intended to offend Vanessa or anyone else.”

But neither Kobe or Vanessa commented on it until now.  Instead of posting a mirror pic, Vanessa took to Instagram to voice her opinion on the lyrics.

“I love when immature kids quote a rapper that has never been friends with Kobe and knows nothing about our relationship. Just shows how gullible they are. I don’t need to be in the gym. I’m raising our daughters, signing checks and taking care of everything else that pertains to our home life. […]

I really wish people would stop THINK and then realize that they are being sucked into someone’s clear intention to monetize and gain attention off of our family’s heartache. This is real life. I hold down our home life so my husband can focus on his career. It’s a partnership.

Since my husband isn’t friends with Drake, we received a text of an apology forwarded from his manager. It’s done and over with and it’s now time for people to THINK before speaking”.

Shout out to Gossip Daily 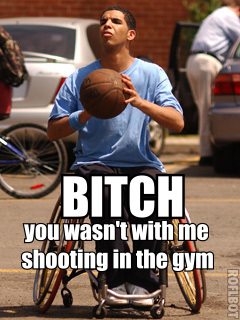