19 years ago today, David Stern walked on a stage at General Moters Place in Vancouver and said “With the fifth pick in the 1998 Draft, the Golden State Warriors select Vince Carter from the University of North Carolina.” A relieved looking Carter hugged his mom then went around his table hugging each person while flashing his million dollar smile. He then put on a Warriors hat and made his way to the stage, constantly shaking his head, taking big breaths and exhaling like a person who just avoided a disaster.

In a way it seemed like destiny. Many people, not lucky enough to live 30 minutes away Mainland High like me, first heard of the high-flying high school phenom out of Florida when he appeared as a “face in the crowd” in a February of 1995 issue of Sports Illustrated with Orlando Magic’s Penny Hardaway on the cover. He ended up in Orlando when the Magic traded the rights to #1 pick Chris Webber to the Warriors for their #3 pick (Penny) and three future draft picks during the 1993 NBA Draft. One of those future draft picks was a 1998 pick that ended up back in Golden State’s hands after multiple future trades. A pick that turned out to be Vince Carter.

Before the thought of being a Golden State Warrior really sunk in Carter’s head, David Stern announced that he and his friend and former UNC teammate, Antawn Jamison, were switching teams.

“I would like to announce a trade.” Said Stern to a roar of boos. “Toronto has traded the rights to Antwan Jamison to Golden State for the rights to Vince Carter plus cash consideration.”

And just like Webber and Penny did during the first round of the 93 Draft, Jamison and Carter were on stage, switching hats and smiling with David Stern again. Carter had an especially big smile on his face because he knew he was going to be playing ball with his cousin Tracy McGrady.

I don’t have to say much about the next few years of Vinsanity. You know all about the dunks. You know all about the All-Star appearances — including the epic 2000 dunk contest that took place in…Oakland! You know Carter’s popularity during the late 90s and early 00s was second to none — including Michael Jordan, who only got to start in the 2003 All-Star game because Carter gave up his spot to the man he’s been compared to since his high school was selling a Carter VHS tape known as “Come Fly With Me Part 2.” And you probably know the stories about him playing basketball with the kids of his Raptor teammate Dell Curry.

After a few underrated years in New Jersey, on the day of the 2009 NBA draft, Carter was traded to Orlando, which is just an hour away from his hometown and the home of the team he grew up watching and loving with the player responsible for him ending up as draft pick of the Warriors.

A few more years went by and Carter found himself being traded to the Phoenix Suns where fans expected him to replace the high-flying former Warrior and fellow dunk champion Jason Richardson. His short time in Phoenix, while wearing a new number — 15 was taken by Robin Lopez — might be his least talked about years in the league.

A year later, Carter was reunited with his USA and New Jersey Nets teammate Jason Kidd as a members of the Dallas Mavs. Still wearing #25 and occasionally showing flashbacks of #15, Carter became a fan favorite as mainly a three-point specialist playing alongside the 9th pick from his draft, Dirk Nowitzki, who was also traded on draft night. He had the 7 for 9 from downtown performance in Game 5 against the Spurs in 2014. He had the game-winning three in another game against the Spurs. He also became the 18th player in NBA history to make 1,500 3-pointers and of course the landmark came during a game against the Warriors.

In 2014, at the age of 37, Carter took his talents to Memphis. As a member of the Grizzlies — wearing #15 again — he continued to defy gravity and logic by “turning back the hands of time” on a daily basis against defenders half his age. Unfortunately for Vince, the one opponent no basketball players has ever been able to beat is father time. And the oldest player in the league knows father time is only going to allow him to play a few more years and those years are probably going to remain ringless because of the Golden State Warriors’ “Super Team.”

So here we are, a couple of days after watching kids 22 years younger than Vince, get drafted and put on their team hats the way Carter put a Warriors hat on his head almost two decades ago. And rumor is, the possibility of seeing Carter wearing another Warriors hat in the near future is becoming a strong one and one that makes a lot of sense.

On a recent visit to the ESPN show The Jump, here’s what he had to say about possibly playing for the NBA champions.

“I’m open for it,” Carter replied. “I want to win. I want to play and I want to do somewhat what Kevin Durant did. I want to do for my team. I want to go out there and play and provide and show that I can still play this game.”

One member of the Warriors who wouldn’t mind being able to play Carter in practices again is Steph Curry. This was his response to an Instagram image of Carter and Curry with the hashtag #soon.

I likey too. And I’ll like it even more if my 23-year journey following Vinsanity ends with me seeing him put on a NBA championship hat. 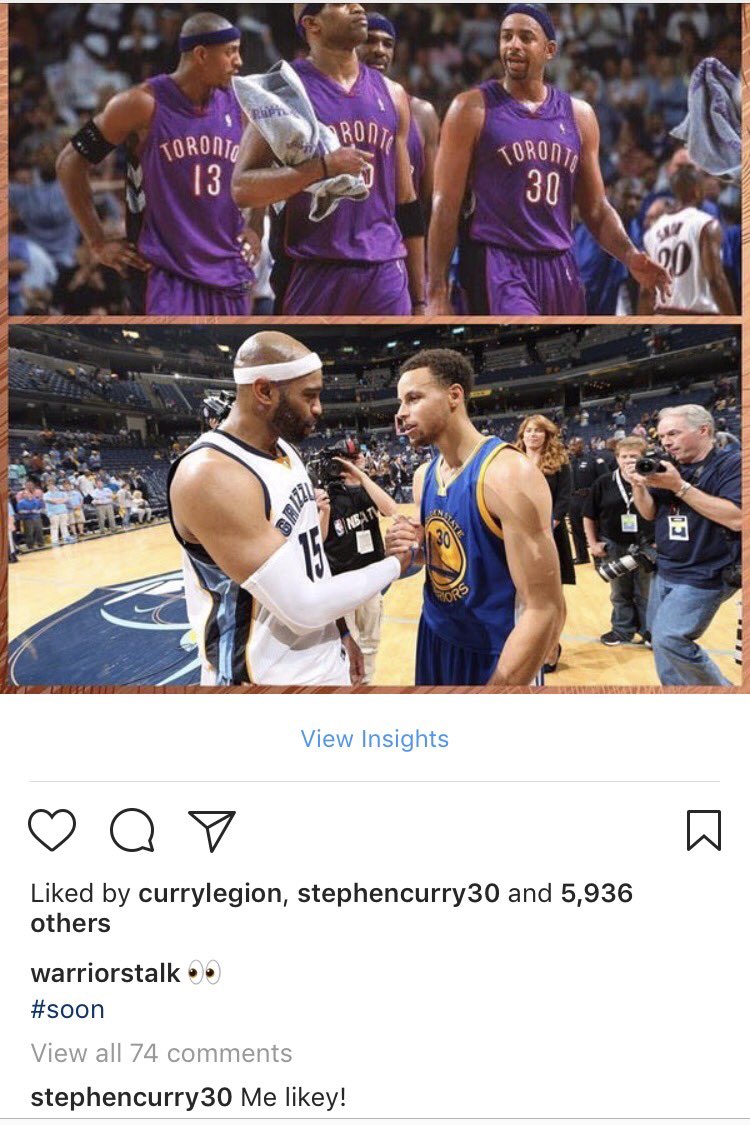