On Thursday, with his fifth field goal in another win (10 in a row) for the Cavs, LeBron passed up English and moved into the 10th spot on the NBA’s all-time made field goals list. After the game, English sent a pretty funny (if you are as childish as me) congratulations to the King on his latest scoring accomplishment.

@KingJames just passed me on the all-time FG made list! Congrats and Keep on stroking young fella. https://t.co/sMwY5SXmZ6

As childish as I still am at times, I’m thankful that I’m an adult and old enough to remember the greatness of English. Unfortunately, I was a child when the 6’7″ 2nd round pick (FYI, there was only 17 picks in the first round) was leading the league in scoring as a member of Doug Moe’s run-and-gun Nuggets, averaging close to 30 points season after season while shooting over 50%. But, I still got to witness a mid-30s English average 27 points a game near the end of his career. I also got to watch him show flashes of offensive brilliance during his final season in the league as a member of the pretty awful 1991 Dallas Mavs (shout out to Rolando Blackman, another criminally underrated scorer from the 80s).

As impressive as it was that English made the All-Star game eight consecutive years with a then NBA record eight consecutive 2,000 point seasons, the stat I love to point out about the 3 x All-NBA second teamer is he only missed seven total games during the 80’s; He never missed more than two games in a single season for a whole decade! Since he averaged so many points (28 over five seasons) while rarely ever missing a game, he finished the decade with the honor of being the top scorer from the 80s — take that Bird, Dominique, Kareem, Dantley and Jordan fans! When raving about his game (or hating on certain players in today’s game), I also love to point out that he was the master of the lost art that is the mid-range jumper and averaged less than .01 threes a game.

Despite all of these impressive numbers, he was somehow left off the NBA 50 list in 1996…but Dave Bing made it…but Dave Bing was also a voter.

Before we get into a few videos of the NBA 50 snub, including a video called Meet Alex English: The NBA’s Greatest Scorer in the 1980’s, I like to bring things back full circle. So the way I’m going to connect this back to LeBron and the Cavs is by bringing up English’s acting role in the forgettable 1996 (!) film Eddie. In it, he played the coach of the Cleveland Cavaliers. 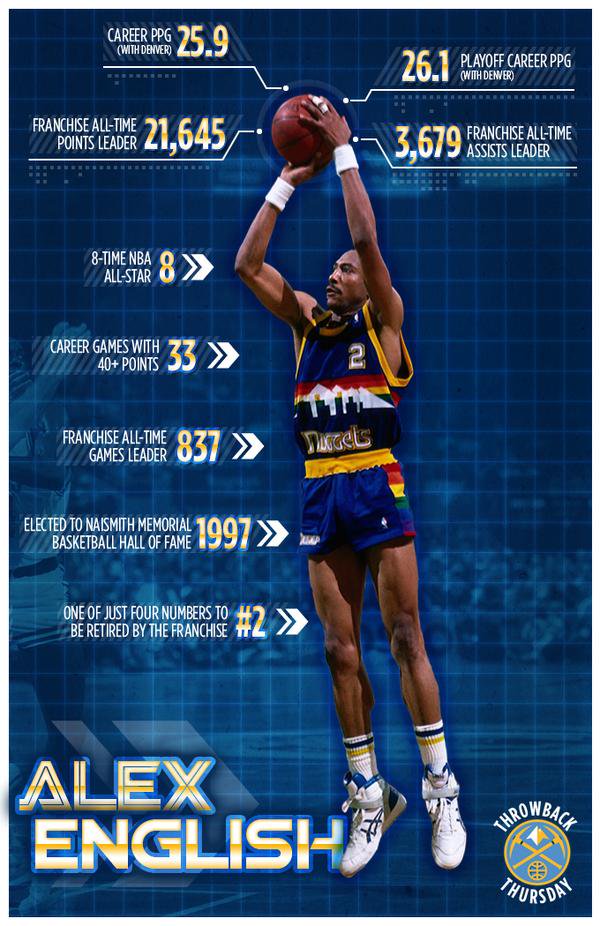