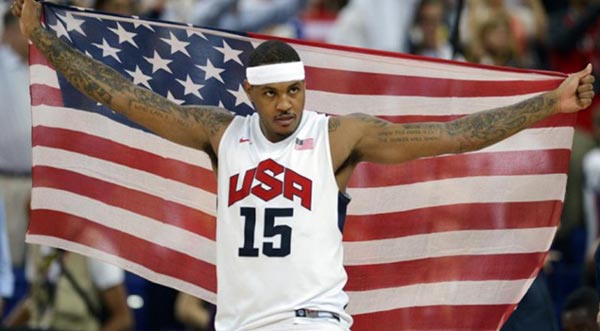 This year Carmelo Anthony set the mark for all time leading scorer for the Mens National Basketball team at the Olympics in Rio. Although obtaining his 3rd gold Olympic Medal is the primary goal of course.

Capping off a 98-88 win over Australia, Melo picked up 31 buckets to pass David “The Admiral” Robinson, & LeBron James to become USA Basketball’s all time leading scorer. Melo has been participating in the Olympics since ’04 where he & fellow teammates had to settle for bronze. Carmelo decided to make a return for the ’08 Olympics in Beijing to recapture gold with the “Redeem Team”. Then picking up his 2nd gold medal in 2012 in London, & now his sights focused on his 3rd gold medal in Rio this year.

No doubt, Carmelo will go down as one of the greatest players to represent the USA in basketball. I mean… he just gets buckets in international play with his knockdown three ball & pure low post scoring. Check the video below to see how Melo has become the man on Team USA.