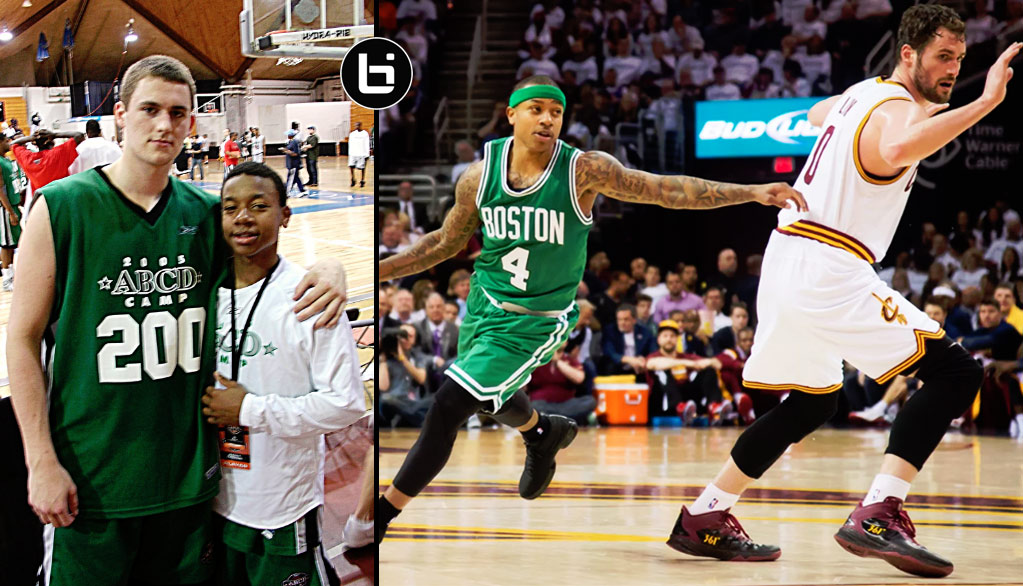 Awwww! On Tuesday night, a throwback photo of a young Kevin Love and very, very young looking Isaiah Thomas went viral. The classic photo of the two 16-year old future NBA All-Stars and former middle-school AAU teammates was captured during the 2005 Reebok ABCD Camp. The now defunct camp was a product of hoops grass-roots Godfather Sonny Vaccaro, a staple of the summer basketball circuit for two decades and where a lot of basketball players first made a name for themselves.

The specific 2005 camp was the subject of a must-see ESPN special, which featured Love and other top prep players like Greg Oden, OJ Mayo, Bill Walker and Lance Stephenson. And if you don’t blink during the first 10 minutes of the show, you might catch a cameo by a little-known Thomas giving a peace sign while wearing a UNLV shirt.

Here’s a few interesting camp notes about Love and Thomas from then Scout.com writer Jeff Goodman.

Kevin Love, C – Three losses in a row for the big man, but it’s not his fault. He’s still doing his work in the post and on the glass, but there’s a chemistry problem on the team. The one area where Love isn’t quite as effective as usual is passing, but he’s scoring domainating in every other facet.

Isaiah Thomas, PG – Not normally known for playing under control, the Washington-bound point guard (and we use that term somewhat loosely) has shown the ability to run a team here rather than just trying to score – which he normally does. Give him a lot of credit because he’s playing with a purpose and it’s working.

And before we get into the ABCD show, I have to recommend Thomas’ recent appearance on the Vertical Podcast with Woj. If you go to the 27:47 mark of the conversation, you can hear Thomas talking about the camp and quickly naming all of the guards ranked ahead of him: Derrick Rose, Jonny Flynn, Corey Fisher, Mike Conley, Brandon Jennings, James Harden, OJ Mayo, Edwin Rios, Bill Walker, Lance Stephenson.  And he also talks about his childhood relationship with Love and his family.

“Kevin and his dad Stan, they would come pick me up and I would stay the weekend at his house so I could play on that AAU team. It’s something that me and Kevin, we’ll talk about. It’s crazy that we’re both in the NBA and he is at the level he’s at, and I’m doing pretty well. To be able to say that I used to go to his house every other weekend and stay the night, and his parents used to cook dinner, and all that type of thing, it’s crazy to see that.”