On Tuesday night, Blake Griffin gave us the dunk of the night when he put Rudy Gobert on a poster then did an amusing hanging on the rim mash-up of Shawn Kemp and Dave Chappelle’s Prince. Between this dunk and his poster on Julius Randle earlier in the week, it’s safe to say dunking Blake — the guy who gave us the term “Mozgovd” and killed Pau Gasol twice in a single game — is back!

The dunk on Gobert also reminded me there’s just as many posters of The Stifle Tower as the Eiffel Tower. And as much as I like Griffin’s poster, I don’t think it’s one of the best.  Here’s a few of my favorite contenders for the title in no particular order.

Gobert can blame his former teammate with the best hair in the league on this one. One of the best things about this dunk was the fan (10 second mark) standing up and yelling at Gobert for getting posterized.

Gobert was just 8-years old when a 23-year old Vince Carter jumped over 7’2 french guy Fred Weis in the Olympics. 14 years after the dunk, a 37-year old Carter let Gobert know what it feels like to be struck by Vinsanity. 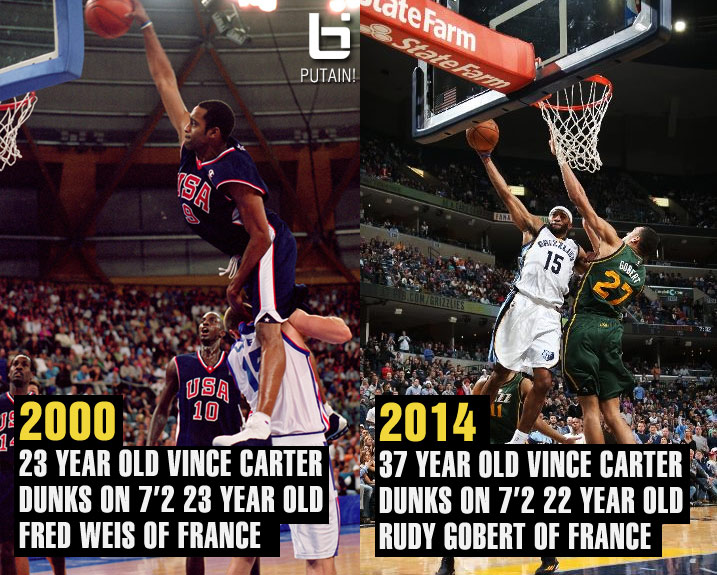 Not once but twice! In Gobert’s defense (no pun intended), he did block one of the three poster attempts by Wiggins in this game. But nobody cares about him going 1-for-3 against Wiggins; they just remember Wiggins going 2-for-3 against him.

This dunk is great because Lillard left his defender on the ground before taking off and dunking on Gobert. This time Gobert can blame All-Star voters because Dame was a man on the mission after being snubbed for the 2015 All-Star game.

At 6’3, Lillard is also the shortest guy to climb the Stifle Tower.

This dunk is similar to Blake Griffin’s dunk since Gobert never really challenged it.

I know people get upset when I celebrate missed dunks but this Beastbrook dunk attempt deserves a mention in this post.