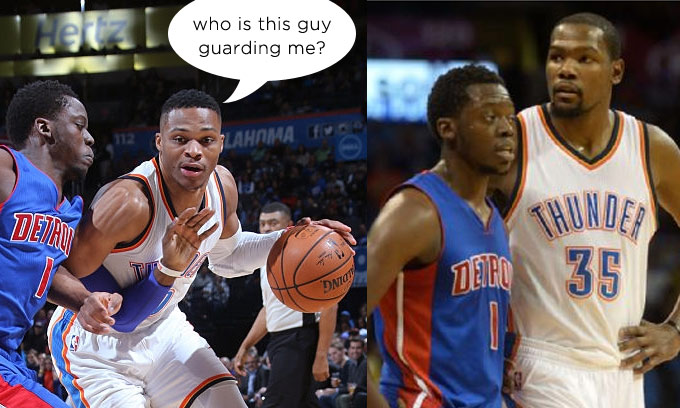 Remember back in February when Kevin Durant said “we felt like everybody wanted to be here except for one guy?”

That one guy was Reggie Jackson who got his wish of being traded away since he wasn’t too fond of backing up Westbrook in OKC. On Friday, that guy made his return to OKC and was greeted by hometown boos as he struggled (4-16 fg) to hit a shot as his Pistons took a 16 point L.

“I love to be hated,” Jackson said of the boos. “It’s flattering, the greatest honor of them all. It’s love and spite all at the same time. They wouldn’t boo me if I didn’t do anything and build some memories here.”

After the game, that guy didn’t get much love from his former teammates either.

“Who?” responded Westbrook when asked about the Jackson.  “Nobody in this locker room was worried, we just came out and competed. Just another player on another team.”

A player who isn’t even a top 2 player on the Pistons according to Durant.