If you don’t know much about NBA Champion Stephen Jackson and “your Google don’t work,” here’s a few things to know about Captain Jack from Port Arthur, TX (What’s up Bun B). On the court, he played 14 seasons in the NBA, averaging around 20 points with four different teams. You can now catch him putting up those numbers and arguing with coach Charles Oakley (must-watch video above) in Ice Cube’s BIG3 league.

Off the court (and coming off the court), he’s built a resume very few players can touch. A resume that includes him running into the crowd and punching a fan during The Malice At The Palace, turning into Dahlsim and choking Steve Francis because the Franchise wanted to dance behind him while he was rapping at a club, and pulling out a 9mm and shooting five shots at a car that JUST HIT HIM outside a strip club in Indy!

Basically what I’m saying is you DO NOT want problems with Stephen Jackson.

On Wednesday morning, news of Jimmy Butler wanting to break up the BIG3 that was supposed to be him, Karl-Anthony Towns and Andrew Wiggins hit the internet.

Shortly after, Butler posted a workout video to his Instagram story that ended with him saying, “Hallelujah. Keep that same energy.”

Stephen Jackson also took to Instagram to mock the brothers, saying Andrew “has no heart” and Nick shouldn’t even be talking since he’s not in the NBA. His message ended with him saying, “Keep that same energy.”

Everyone from Tracy McGrady to Paul Pierce to Terrell Owens to Fat Joe thought the video was hilarious. As expected, the brothers did not.

Here’s what Andrew posted to his IG story and what Nick said in a reply to Jackson. 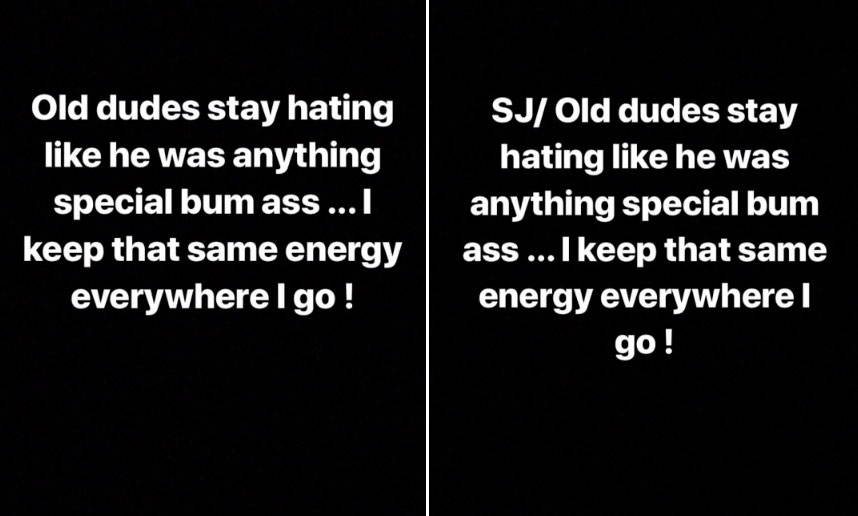 Jackson responded to Nick by reminding him why he never made the league and saying, “I see your Google don’t work.”

Jackson then posted another video, wishing Andrew “the best” next season and ending with him hilariously saying, “I’ll catch you in traffic.”

The following morning, Jackson posted a video of himself driving to the gym while listening to some Bun-B. This has nothing to do with the online beef but I like to give Port Arthur’s Bun B and the late Pimp C as many shout-outs as possible.

Worldwide From the Westside. Lest put this work in and get better. Anytime u hear UGK u know it’s TrillyTrill #PATexas #Westside

If you are interested in juicy (and probably not true) stories about the breakup up the Minny BIG 3, there are articles floating around about Jimmy Butler being the reason why KAT and his girlfriend broke up. Here’s what KAT had to say about that.

And here’s what Jimmy Butler is really doing at 5 AM.

5am left hand work with my guy @jimmybutler ??#5amworkoutsaintforeveryone