How is this for an early nominee for NBA story of the year. Four weeks ago, a desperate Dallas Mavs signed 6’0 undrafted point guard Yogi Ferrell to a 10-day contract. The same Yogi who was cut by the God-awful Brooklyn Nets earlier this season.  Today, on March 2nd of 2017, Yogi wins the Western Conference Rookie of the Month.  So in honor of  Yogi-Mania, let’s look back at his last month.

In his first game (and start) with the Mavs, he puts up 9 points — including a pair of free throws in the final 10 seconds — and 7 assists in a win over the Spurs. Not bad, but nothing to get too crazy about. We know the man wants another 10-day contract.

In his second game, he outscores Kyrie Irving 19 to 18, grabs 5 boards, dishes out 3 assists and gets 4 steals in a shocking win over the Cavs.

Next is the Embiid-less 76ers, Yogi struggles by missing 10 of his 13 shots but the Mavs win again. Maybe this kid is a good luck charm.

Then on February 3rd, the rookie goes full Linsanity and knocks down a NBA rookie record 9 3-pointers against Damian Lillard and the Blazers. Mavs win streak continues.

“He’s an opportunistic guy and it’s pretty clear that he’s out to prove a point,” Dallas coach Rick Carlisle said.

Yogi also became just the third undrafted rookie in NBA history to have a 30-point game within his first 15 games. The other two were Anthony Morrow and the great Connie Hawkins.  Yeah, yeah I know that’s one of those crazy ESPN stats but where do you think I stole it from.

As an encore, he really doesn’t do anything special (15 points on 4 for 11 shooting) against the Nuggets and the Mavs lost. Then the Blazers got some payback, Yogi struggled again and the Mavs lost again.

The Mavs bounced back with back-to-back wins against the Jazz and Magic and then took on the hot Boston Celtics.  Isaiah Thomas and crew got the W but Yogi was big with 20 points on 8 of 11 shooting against Mr 4th Quarter and his 29 points.

They are 2-3 in their last 5 games and Yogi is shooting under 30% in that stretch but the Rookie of the Month award is well deserved and so was his multi-year contract, which was signed on February 7th. 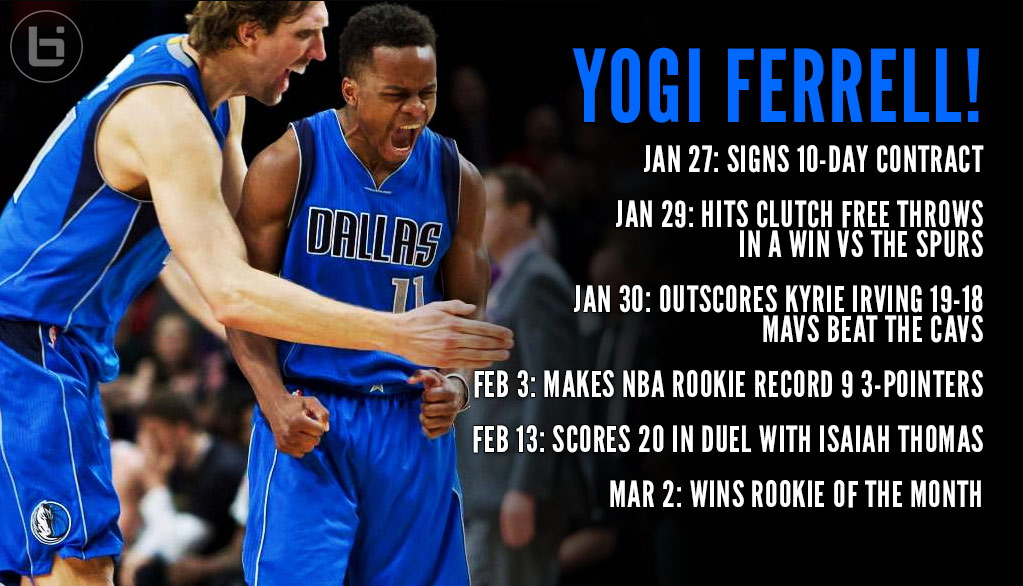