Before Friday’s match-up between the Lakers and TWolves, Former Ballislife All-American, LA native and UCLA alum Zach LaVine said he was excited to play against his childhood idol and planned to go right at him.

“That was my childhood idol, but now that I’m on the same court as him I know I’ve just got to go at him.  said LaVine. “He’s going to go everybody. Kobe is going to do Kobe stuff out there. I just can’t get in awe of it when I’m out there on the court.”

He also planned on using some moves he learned from watching Bryant who was a rookie when LaVine was in diapers.

“I feel like Kobe is one of the greatest ever so of course I try to model some of my game after him just like I’m sure everybody does to some degree. He wasn’t just my favorite player. I know he was a favorite for a lot of these guys growing up.”

Even as president of the Zach LaVine fan club, I have to admit I was shocked to see Zach put up a career high 28 points on 11 of 14 shooting in just 26 minutes of PT.

“I always wanted to come back and put a show on,” he said. “I know a lot of UCLA fans were here, and I know a lot of them are mad I came out (for the draft). But I’m a confident person and I like proving people wrong.

He was perfect from 3 and the free throw line and also had 5 assists in the TWolves 1 point victory. Kobe, who had 26 points and shot over 50% for just the 2nd time this season, had a shot at the buzzer to win the game but missed.

“I’m really surprised he missed that shot. That scared me at the end.” LaVine said.

The joy and excitement LaVine felt after the game was the total opposite of how Coach Byron Scott felt.

“Frustration and anger is going through my head right now,” Scott said. “We weren’t ready to play. There was a lack of focus. We looked at them like they were inferior to us. 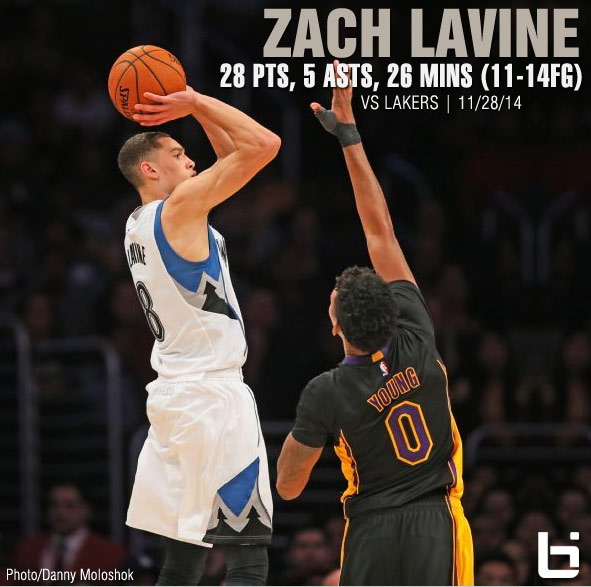